Afternoon rain and tracking the tropics

More scattered rain is expected for most of this week, and we are tracking rain associated with a tropical wave.

Today and Tonight: We will be starting the week with some scattered showers. Staring in the afternoon, showers will form near the coast and largely on the west side of the Mississippi River. A few more isolated showers are possible further east. About 40% of our viewing area will see some rain today. There is plenty of available moisture for a few heavy downpours, gusty wind, and lightning. Temperatures will heat to near 93 degrees and overnight cooling to near 76.

Up Next: The main story this week is the rain. As we move through the week, rain chances will go up in association with a tropical wave (read more in The Tropics). Tuesday and Wednesday will have highs near 94 and 93 respectively. Wednesday will be a little rainier than Tuesday and by Thursday, showers and storms become more widespread. As of now, it looks like there won’t be enough rain and cloud cover to keep our highs out of the 90s. Highs for the end of the week will be near 90. 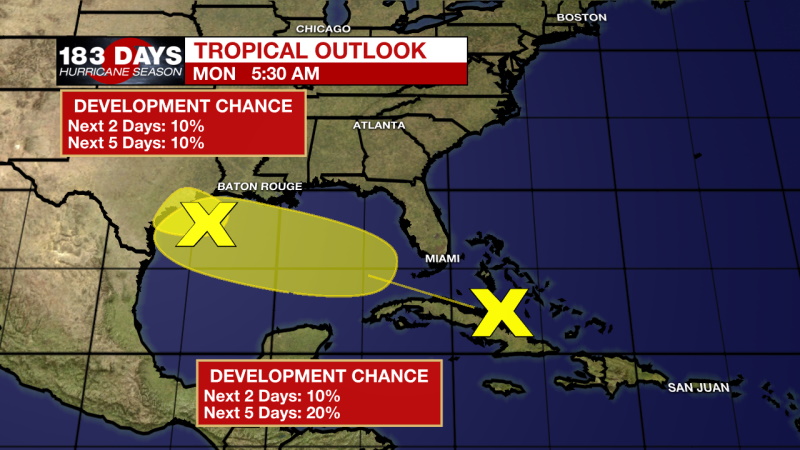 The Tropics: Surface observations indicate that a weak low pressure area has formed over the northwestern Gulf of Mexico.  The associated shower and thunderstorm activity is currently disorganized, and little additional development is expected before the system moves inland over Texas tonight or Tuesday. Formation chance through 48 hours...low...10 percent. Formation chance through 5 days...low...10 percent.

Disorganized showers and thunderstorms over the central Bahamas, central Cuba, and adjacent Atlantic waters are associated with a tropical wave. Environmental conditions could become a little more conducive for development of this system over the Gulf of Mexico. This system is expected to move west-northwestward through the Straits of Florida today, over the southeastern Gulf of Mexico by Tuesday, across the central Gulf on Wednesday, and reach the northwestern Gulf on Thursday. Formation chance through 48 hours...low...near 10 percent. Formation chance through 5 days...low...20 percent. This disturbance is likely to impact us later this week.

A tropical wave located more than 900 miles west-southwest of the Cabo Verde Islands is producing a small area of disorganized showers and thunderstorms. Environmental conditions are expected to be marginally conducive for development of this system during the next few days while it moves westward at 10 to 15 mph over the tropical Atlantic. By Friday and over the weekend, conditions are forecast to become less favorable for tropical cyclone formation. Formation chance through 48 hours...low...20 percent. Formation chance through 5 days...low...20 percent.

Deep moisture that was suppressed for most of last week is now very evident in our area. An easterly wave will enhance moisture and instability. Shower activity through Wednesday will be enhanced due to this wave and the status of the tropical wave will determine rain probability for the rest of the week. All the rain will keep the heat down to a more manageable 90 degrees.