Active rain and storm pattern to start the week

Healthy rain coverage is anticipated through the first half of the week. Recall that summer storms get a lot of energy from Gulf Coast heat and humidity so they can produce downpours, frequent lightning and gusty wind. You should stay indoors as long as you can hear thunder.

Today and Tonight: Southeast winds will continue to keep Gulf moisture pushing onshore. This will prime the atmosphere for an upper level disturbance to kick out scattered to widespread rain and thunderstorms from mid-morning through early evening. Most locations should experience rain today with downpours, frequent lightning and even gusty wind possible in some storms. Temperatures will be limited to the upper 80s because of clouds and rain starting early.

Up Next: Yet another, weaker disturbance will move across the region on Tuesday. We can again expect gusty winds and times of heavy rainfall. Rain coverage should slowly taper off through midweek, as warmer, more stable air develops over the area. Isolated to spotty afternoon storms will remain possible, but be much more isolated. High temperatures will get back to average in the low 90s. 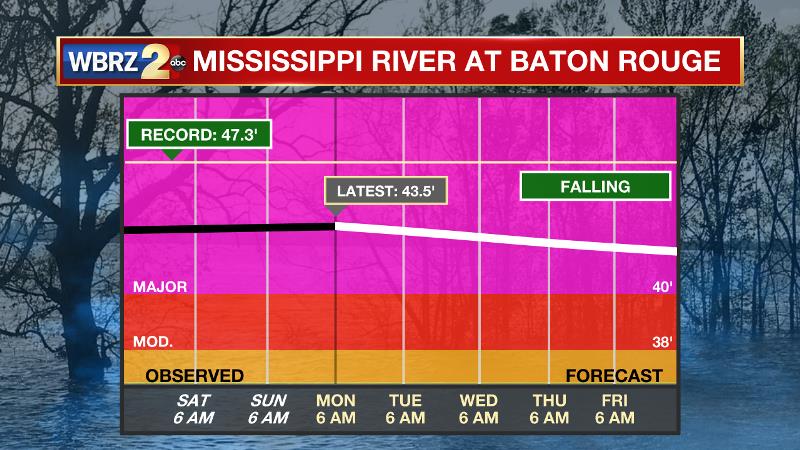 The Mississippi River: At Baton Rouge, major flood stage continues with a level of 43.6’ as of Monday morning, marking a second crest for the year. Peaking at 44.1’ on March 19, the river set its 7th highest recorded crest at Baton Rouge. At 163 days, this year marks the longest period above flood stage at Baton Rouge. The level will slowly begin to fall, but is likely to stay above flood stage for several weeks to come. The high water will remain an issue for river traffic and river islands, although some inundation will continue for unprotected low-lying areas. The city of Baton Rouge and the main LSU campus are protected by levees up to 47 feet. Some soggy areas and seepage may be noted due to the long duration of high water placing pressure on the levees. As some of the Mississippi River diverts into the Atchafalaya River, gauges at Krotz Springs and Morgan City will stay high as well. This creates backwater flooding in parts of Assumption Parish in areas such as Bayou Chene, Stephensville and around Lake Palourde.

An active pattern is expected across the Gulf Coast over the next few days as a series of shortwave troughs moves from west to east through the region. The most potent will move out the Southern Plains into the Lower Mississippi River Valley Monday. Upper level divergence helps to ventilate and therefore maintain showers and thunderstorms and plenty of this is expected through Tuesday. There is ample moisture in the atmosphere as well. These two features will lend to scattered thunderstorms developing by mid-morning, becoming widespread by afternoon with downpours and frequent lightning. Movement on the storms should keep most of the heavier rainfall rates in the 1 to 2 inch per hour range, however localized areas where more stationary or repetitive bands set up could see some 3 to 4 inch amounts through the day. Gusty winds may occur with more organized clusters, especially where storms are moving faster. An ongoing convective complex may move through the region early Tuesday, with numerous showers and thunderstorms around the area. Gusty winds and downpours will again be possible. Moisture content will be decreasing over the forecast area on Wednesday, however additional, weak upper level disturbances will support isolated to scattered showers and thunderstorms through Wednesday. The week will end with more typical daytime warming induced isolated to scattered showers and thunderstorms. A ridge should then expand out of the tropical Atlantic into the Gulf of Mexico Friday and Saturday, so a drier and warmer pattern is likely to return with only 20 to 30 percent rain coverage during peak heating hours.