We will have to dodge some showers and thunderstorms over the weekend. Meanwhile, the Eastern Seaboard is preparing to deal with weather from Hurricane Isaias.

The Next 24 Hours: A decaying squall line will sneak into northern and western parishes and counties this evening. Running into cooling temperatures and drier air aloft will not allow it to do much harm but a few showers and rumbles of thunder are possible. It is also possible that the line will not even survive into Baton Rouge. Overnight will be muggy with lows in the mid 70s. On Saturday, a stalling, weak front will instigate scattered showers and thunderstorms, especially as daytime warming begins. One or two storms could create gusty wind and frequent lightning. Due to the added activity, highs will stop in the upper 80s.

The Long Term Trend: Isolated to scattered showers and thunderstorms will also be possible on Sunday afternoon as the front falls apart. A break from mentionable rain chances is expected on Monday before a second front pushes into the Capital Area with isolated showers and storms around the middle of next week. There are some signs that this one could make it to the coast, therefore slightly decreasing dew points (humidity) and low temperatures for a day or two. No major changes, but maybe lows will be in the lower versus middle 70s while highs stay in the low 90s. 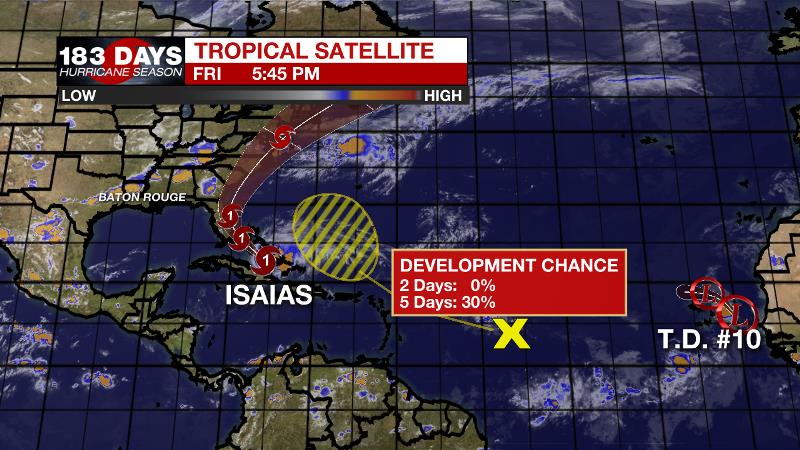 The Tropics: As of 4pm Friday, Hurricane Isaias was 190 miles south of Nassau in the Bahamas with maximum winds of 75mph and moving to the northwest at 15mph. The storm is expected to continue on this path but slow down as it approaches southeastern Florida on Saturday, while maintaining hurricane strength. The storm is expected to begin turning north-northwest as is approaches the U.S. Mainland. While a landfall is not certain but possible, Hurricane Warnings have been issued for the Bahamas and from Jupiter Inlet to the Brevard/Volusia county line in Florida. Fresh off the African Coast, Tropical Depression 10 has developed near the Cabo Verde Islands. This storm will have a short lifespan, possible becoming Josephine before diminishing by early next week. A wave midway between Africa and the Lesser Antilles has a 30 percent chance of formation over the next 5 days.

The Explanation: Associated with an upper level trough, a weak cold front will stall across Louisiana and Mississippi over the weekend. Working with ample summertime warming, this front will be a focal point for scattered showers and thunderstorms over the next few afternoons. Compared to the soaking conditions of the last week, the atmosphere will be a bit drier this weekend, which will allow some storms to produce frequent lightning and gusty wind. This is because as dry air is pulled into a storm cloud, rapid cooling occurs. Cooler air is denser and therefore quickly falls to the surface in what is known as a downdraft. And even though drier, this is still a summer air mass, so downpours remain possible as well. Once the axis of the trough slides east on Monday, anti-cyclonic flow aloft will negate organized convection. However, another weak cold front will sneak into the region and with the upper level cooling carved out by the trough; this one should have enough integrity to make it into the Baton Rouge area and possibly to the Louisiana coast. A few showers and thunderstorms may form along the slow-moving boundary on Tuesday or Wednesday, but the atmosphere will be rather inhospitable for widespread activity. If the front can make it through, dew point temperatures could drop below average for 12-24 hours, perhaps allowing a below average low temperature in the upper 60s or low 70s on Thursday morning.