While many locations have already received 2 to 4 inches of rain and some isolated totals as high as 10 inches, the heaviest activity is pegged for Wednesday and Wednesday night. Much quieter and more comfortable weather will follow.

Next 24 Hours: While the coverage may go down, scattered showers and thunderstorms remain possible overnight beneath mostly cloudy skies. It will continue to feel muggy with low temperatures in the low 70s. Into Wednesday, mostly cloudy skies with just a few breaks of sun will keep high temperatures in the low to mid 80s. A cold front will begin to move into the region through the day, bringing more active and impactful weather. Though a full on washout is not anticipated, there will be multiple rounds of rain and thunderstorms from late Wednesday morning through Thursday morning. Some of the thunderstorms could produce downpours leading to a broad 2 to 4 inches of rain and isolated totals over 6 inches. Given what has fallen over the past few days, these amounts could lead to street and poor drainage flooding. Secondary to the chance for heavy rain, there is an outside shot at one or two severe thunderstorms as well, with gusty wind being the most likely hazard. 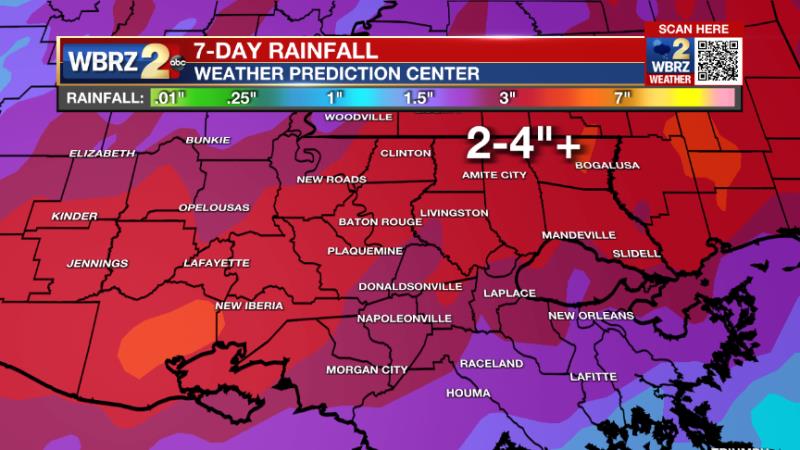 Up Next: Conditions should begin to improve rather quickly on Thursday morning. Behind the front, winds will turn around to the northwest and drier air will overtake the region. Clearing skies and lower humidity can be expected as soon as Thursday afternoon, but certainly overnight into Friday. Rather pleasant late May weather is anticipated for the Memorial Day Weekend, with cooler than average low temperatures and a couple of mornings in the low to mid 60s! The next chance for rain is not likely until after the long weekend. CLICK HERE for your detailed 7-Day Forecast.

The Explanation: The last rounds of showers and thunderstorms for the week will be created by an upper level trough of low pressure lifting through the Great Plains during the middle of the week. An associated cold front will be pulled eastward and into the local area on Wednesday afternoon. With plenty of instability by that time and even higher atmospheric moisture than previous days, widespread showers and thunderstorms will develop. Since wind shear is lacking, there is not significant threat for severe thunderstorms but some downpours certainly remain possible, if not likely. The action may continue overnight and into early Thursday until the cold front passes through the area. From Wednesday to Thursday morning, area wide totals of 2 to 4 inches are likely with isolated amounts over 6 inches. While the area has been in drought conditions of late, the last few days have moistened up the soil enough that this rainfall could cause some problems. Yes, it does appear this cold front will move through the area to change up conditions into the Memorial Day Weekend. Surface high pressure and an upper level ridge of high pressure will quickly build in behind the front and we will see dry weather return. Not only will humidity be quite a bit lower, but low temperatures could be in the low 60s on Friday and Saturday morning. The high temperatures will not be as affected, still climbing into the upper 80s due to ample sunshine. By Sunday and Monday, highs will be back into the low 90s with lows in the upper 60s and low 70s. After all, it is late May.