The National Weather Service has issued a TORNADO WATCH has been issued for all of the WBRZ Viewing Area through 11 a.m.

A TORNADO WATCH means conditions are favorable for tornadoes and/or damaging winds in and around the watch area. Be on the lookout for threatening weather conditions and listen for later statements and possible warnings. If a tornado warning is issued, seek shelter in a low-level, interior room of a sturdy building. Take pets (on a leash) with you, have on hard-soled shoes, monitor storm coverage on a wireless device and cover your head in the event of wind or tornado impact. For more on tornado safety, CLICK HERE.

*TORNADO WATCH* for the shaded area. We're tracking storms and will bring you warnings if issued. #lawx #mswx pic.twitter.com/M6m8GIWuNC

A FLASH FLOOD WATCH means conditions may develop that lead to flash flooding. Flash flooding is a very dangerous situation. Be on the lookout for threatening weather conditions and listen for later statements and possible warnings. For more on flooding safety, CLICK HERE.

Early Tuesday: A cluster or line of thunderstorms will approach from the northwest after daybreak. Ingredients for severe weather are not as high as previous events and there are some signs that they will not all align at the same time--but we have seen more with less in the past. The Storm Prediction Center (SPC) outlook puts the area in a level 2/5 slight risk. 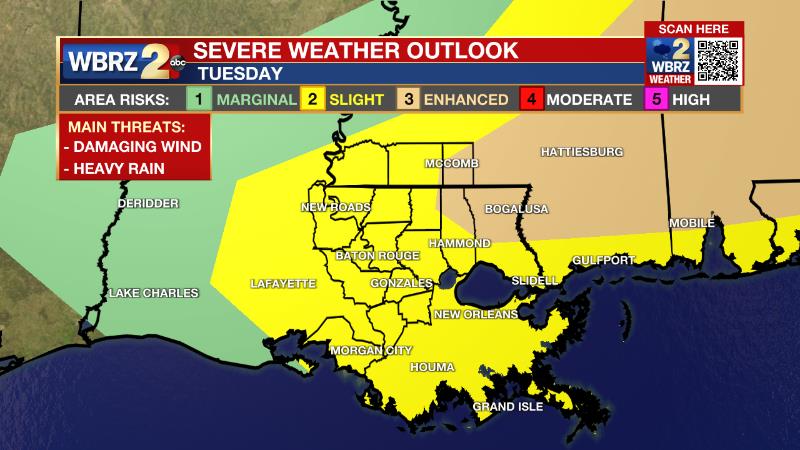 Expect to see rain and thunderstorms reach areas northwest of Baton Rouge around 7am, the Metro Area around 9am and weakening scattered activity may make it to the coast by 11am. Storms are expected to fall apart as they move south. Areas south of I-10 will see much less storm activity with the main line. With these storms, gusty wind is the main threat in terms of severe weather with hail and isolated tornadoes are possible. The line is expected to slow down as it reaches the local area which could cause a period of heavy rain. Most locations will receive an inch or so of rain but one or two spots could have as much as three inches. If and where these amounts fall, street and poor drainage flooding problems could develop.

Reminder: Have a way to receive warnings. Be sure to avoid driving during a severe thunderstorm or flash flood warning. 2une In to WBRZ from 5am - 9am for the very latest forecasts. You can download or activate the WBRZ WX App on your Apple or Android device or turn on a NOAA Weather Radio for bulletins such as watches and urgent warnings. Of course, WBRZ, WBRZ+ and the Cable Weather Channel will have updates as active weather dictates.

The second half of Tuesday will be quieter. Lingering showers will give way to returning sunshine and high temperatures in the low 80s.

Up Next: Wednesday will be muggy. Temperatures will start near 70 degrees with partly sunny skies. The afternoon will bring temperatures in the mid to upper 80s. A cold front will move through during the afternoon and evening hours. While that system may struggle to produce any showers or thunderstorms, any that develop will have plenty of energy to turn strong, especially north and east of Baton Rouge. Beyond that front, the rest of the week and the weekend will be clear with temperatures 5-10 degrees below average. In fact, you will want a jacket in the mornings! Click here to see the 7-day forecast.