Thursday PM Forecast: first some records could fall, then temperatures

A record high-low and record high could both fall on Friday. A cold front will bring a stormy start to the weekend.

Next 24 Hours: Mostly cloudy skies and spotty showers will persist into the evening hours. After midnight, some clearing is possible. With a persistent south breeze, it may be difficult for fog to develop. Those south winds will also hold temperatures way up and some neighborhoods could fail to leave the 70s! The warmest low on record for the date was 68 degrees in 2007. Friday will be especially warm with high temperatures reaching the low 80s. The record high temperature for the date was 82 degrees, set in 2007. If clouds prove to be stubborn and less sun peeks through, highs could run a few degrees shy of that mark. A stray shower is possible, but most will stay dry. 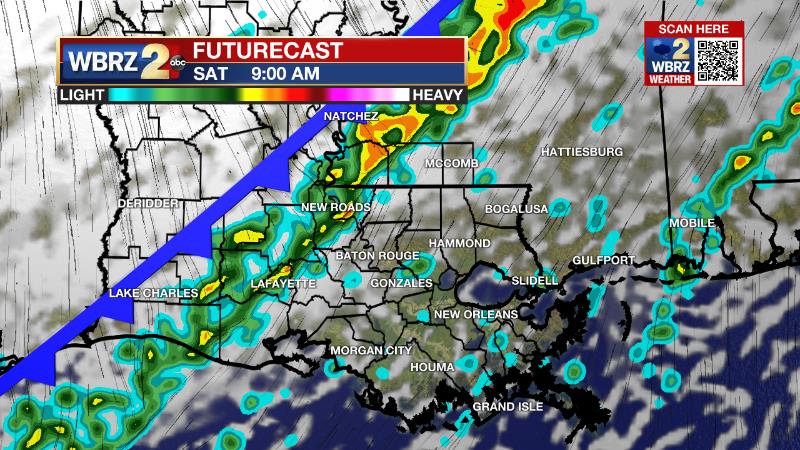 Up Next: Early Saturday, a strong cold front will push into the area with rain and thunderstorms. At this time, the threat for severe weather seems rather low, but not zero. Temperatures will fall out of the low 70s early and into the mid 50s by dusk. Skies will clear out by Saturday night and allow full sun through Sunday. Look for one day of seasonable temperatures with lows in the low 40s and high sin the mid 60s. However, above average temperatures will quickly return and near record warmth is expected Tuesday through Friday next week. CLICK HERE for your detailed 7-Day Forecast.

The Explanation: With ongoing southeast winds and a mild starting point, record high temperatures could be in danger on Friday afternoon. The question will be, how much sunshine is received? Enough low level moisture will be in place that a low cloud deck certainly could be stubborn to break. However, locations that receive a few hours of sunshine should reach the low 80s with ease. An upper level trough of low pressure will barrel across the central U.S. into Saturday. This trough is expected to be positively tilted, which means its center will be oriented from northeast to southwest, and therefore less favorable for severe weather. The basin of the trough will not even extend as far south as the Gulf Coast, which is another check against severe weather. The core of the jet stream, and very strong winds aloft needed for organized thunderstorms are likely to arrive later Saturday and that is yet another limiting factor. The main trigger for showers and thunderstorms will be the cold front associated with this system. Given the unfavorable time of day with minimum warming and lack of high instability, the most likely scenario is for a weakening line of showers and thunderstorms to drift across the region. As the front starts to parallel the upper level trough, it will slow through our area and result in showers lingering well into the afternoon. Temperatures will slowly fall through the day as well, from the 70s in the morning to the upper 50s by the evening. After a seasonably cool start to Sunday, thermometers will quickly begin to moderate. Next week, the Eastern U.S. will be dominated a very strong upper level ridge of high pressure. In fact, as the National Weather Service notes, the ridge could be two standard deviations above normal for the time of year. This means that our very warm December weather pattern will continue with high temperatures reaching the mid to upper 70s for most, if not all, of next week. In addition to the warmth, sinking air associated with the ridge will maintain a mostly dry weather pattern.

?? - We left for work in October and got home from work in August. Watching record warmth on Friday...https://t.co/TeK1l9f1qV pic.twitter.com/EVCcbwiOLj