Sunshine will return on Thursday afternoon. Seasonable temperatures are expected over the next several days.

Today and Tonight: Clouds and showers will quickly exit the area on Thursday morning. Skies will clear from north to south with sun in southwest Mississippi as early as mid-morning, the Baton Rouge area around lunchtime and the Louisiana Coast by late afternoon. However, even as some sunshine returns by afternoon, temperatures will not be able to leave the mid 60s thanks to northerly winds of 5-10mph advancing cooler air into the region. Thursday night will be chilly with low temperatures dipping into the upper 40s north of I-10 and low 50s south. Skies will be clear and winds will be light. 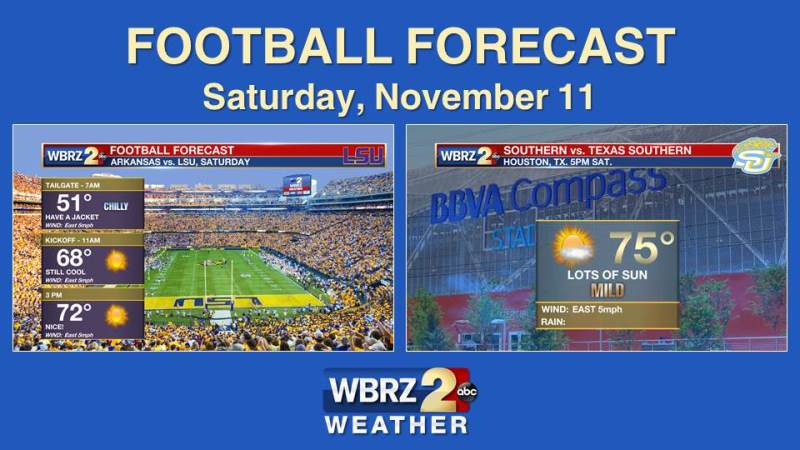 Up Next: Friday afternoon will follow up with sunshine and highs near 70. The forecast for LSU Football playing host to Arkansas on Saturday looks pleasant. After a chilly morning, temperatures will climb into the low 70s by the end of the game. Playing indoors in Houston, Southern fans will not have any trouble getting to the game with clear skies and temperatures in the 70s between Baton Rouge and southeast Texas. The next system looks much weaker and will pass the area on Sunday with a slight chance of showers but no significant change in temperatures.

The Tropics: Tropical Storm Rina has maximum sustained winds of 45mph and is moving northeast at 23mph. The storm will accelerate and weaken, dissipating by Friday night.

A shortwave trough will pull away from the area on Thursday and the associated cold front will be well south into the Gulf of Mexico. High pressure in the northern U.S. will be responsible for a persistent northerly flow. Cool and dry air will remain in place through Saturday, as the high moves from the Great Lakes to Northeast. Low atmospheric moisture will result in clear skies. On Sunday, another shortwave will pass well north of the area. It will send a weakening cold front toward the Gulf Coast but due to low moisture and a lack of forcing, rain output should be limited and mainly near the coast. The weak front will serve to reinforce the seasonable feel though. Yet another nondescript cold front will likely pass on Tuesday.