No measurable rain expected for a while!

It has been perhaps five years since a dry forecast has been so anticipated. Winds and the tropics still make for an interesting weather discussion over the next few days.

Next 24 Hours: Skies should continue a gradual clearing trend overnight. Given all of the low level moisture from abundant rainfall, some fog could develop into the morning as low temperatures will dip into the mid 60s. Through Saturday, east winds will stay elevated at 10-15mph. This will cause a slower runoff of high water down the Amite River and therefore from smaller bodies that drain into it, such as Bayou Manchac. Otherwise, the afternoon will be mostly sunny with high temperatures in the mid 80s. 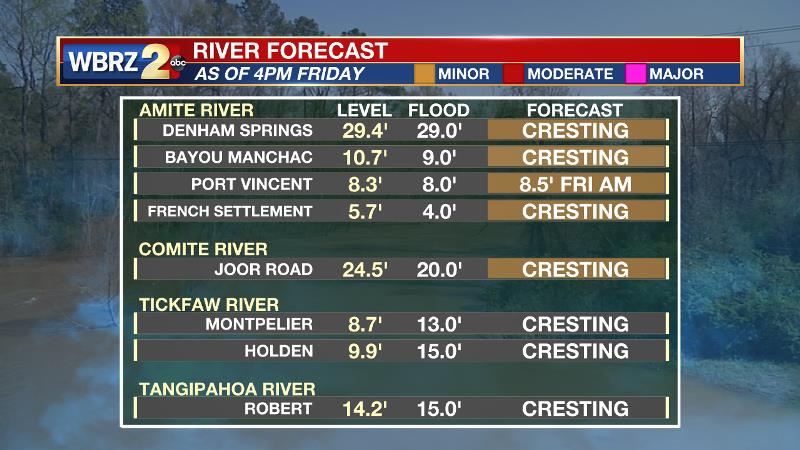 At this time, the Amite River at Denham Springs, Bayou Manchac, Port Vincent, French Settlement and Maurepas as well as the Comite River at Joor Road are cresting in minor flood stage. For more information on the impacts you could expect near these locations, CLICK HERE and then click on the river gauge site of interest.

Up Next: Sunday through Tuesday will continue our long exhale. Skies will remain mostly clear with just some afternoon cumulus clouds. Highs temperatures will be near seasonal average in the upper 80s. Low temperatures will not stray far from average either, in the upper 60s. Next Wednesday appears to be the earliest chance for a pop-up shower or thunderstorm. By and large, the extended forecast is quite as we await the transition into a normal summer pattern of humidity and afternoon thunderstorms. CLICK HERE for your full 7-Day Forecast. 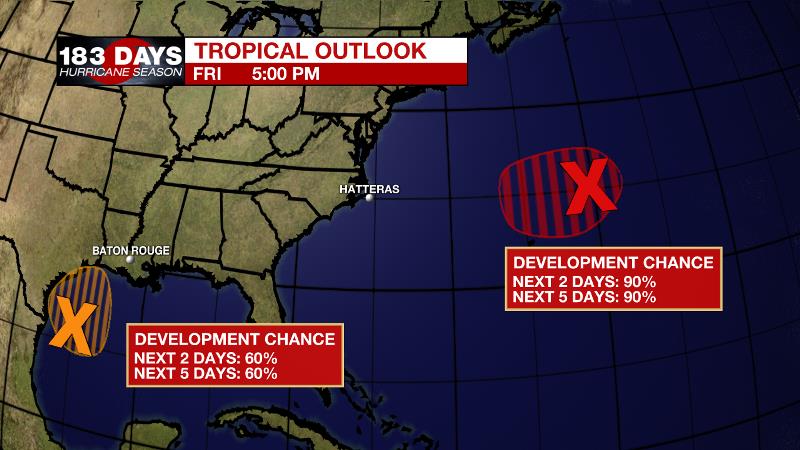 The Tropics: Surface observations and recent satellite wind data indicate that a well-defined low pressure system over the western Gulf of Mexico has winds of 30-35 mph near and east of the center. The associated shower and thunderstorm activity remains limited, but any increase in this activity may result in the formation of a short-lived tropical depression or storm before the system moves inland over the northwestern Gulf coast tonight. Potential Tropical Cyclone advisories may be needed to account for impacts prior to official formation. Regardless of development, the system could produce heavy rainfall over portions of southeastern Texas and southwestern Louisiana through Saturday. Given the complete saturation of soils with ongoing river flooding along the Texas and Louisiana coastal areas, heavy rain could lead to flash, urban, and additional riverine flooding across this region. The National Hurricane Center provides a 60 percent chance of formation.

Showers and thunderstorms associated with a non-tropical low pressure area centered about 300 miles northeast of Bermuda have diminished somewhat over the past several hours, and the system has not yet acquired subtropical storm characteristics.  However, any increase in organization would result in advisories being initiated on the system later today or tonight as it moves westward to west-southwestward to the northeast of Bermuda.  Subsequently, the low is forecast to move northeastward into a more hostile environment by Saturday night or Sunday. The National Hurricane Center provides a 90 percent chance of formation.

The Explanation: There is a medium chance that a low pressure system over the western Gulf of Mexico becomes a tropical depression or storm before moving into Texas tonight or early Saturday. Not to worry locally, that system has already exerted influence over our region with the rainfall and winds. Those wind effects could continue for a few more days contributing to the elevated tides and slow draining of the Amite River basin. In the upper level of the atmosphere, a ridge of high pressure will build over the region into the weekend. The ridge will cause a warmer, drier atmosphere and therefore mostly clear to partly cloudy skies. Lower humidity will result in seasonable overnight low temperatures in the mid 60s. Into next week, winds will ease as the ridge continues to provide a mainly dry weather pattern. A weak, upper level disturbance could potentially help to create some passing showers or thunderstorms Wednesday afternoon, but at this time, coverage looks low. Temperatures will stay close to average with highs in the upper 80s to low 90s and lows in the upper 60s to low 70s.