Alas, we had a day where showers and thunderstorms delivered rain to much of the area. Now, the timing was not great and we could do without severe weather, but the rain was needed by lawns and gardens.

The Next 24 Hours: Tonight, showers will end followed by partial clearing. Winds will remain calm with low temperatures in the mid 70s. Friday should offer a very similar scenario to Thursday. Showers and thunderstorms will erupt pretty early on Friday—perhaps near marine areas first before drifting inland. Scattered to widespread coverage is anticipated. Some of our high-resolution models suggest a heavy batch of storms may once again cross the I-10/12 corridor around the evening commute. Of course, that is subject to change, so check in with WBRZ Weather before hitting the roads. Another day of active weather will result in most high temperatures stopping near 90 degrees.

?? Don't get all hot and bothered over this, even though you are probably hot and bothered. Next week, a cold front (or two) may chip away at some of the humidity; high and low temperatures could dip 3-5 degrees below average (93/74). @WBRZweather will be ??! #LaWX #MsWX pic.twitter.com/vWL6jp1Lso

The Long Term Trend: The shower and storm count should begin to trail off over the weekend. Typical for the time of year, morning sunshine will drive highs into the low 90s before scattered showers and thunderstorms develop near peak daytime warming in the early afternoons. Overnights will be quieter with lows in the mid 70s. Monday and Tuesday, a weak cold front will enter the region. This boundary could spur some precipitation but since it will be accompanied by unusually dry air for the time of year, coverage should be low. Our guidance suggests the front will push through, providing some steam relief and temperatures 2-4 degrees below average (93/74) for the second half of next week. 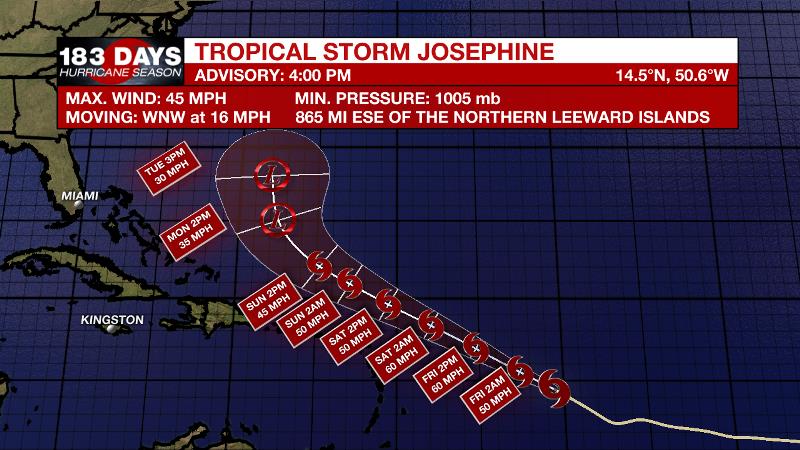 The Tropics: As of 4pm Thursday, Tropical Storm Josephine was producing 45mph winds moving west-northwest at 15mph about 800 miles east of the Lesser Antilles.  The storm will continue on that motion for the next few days, possibly strengthening a little. The storm will pass north of the islands early next week while battling dry air. A low pressure area over the Eastern U.S. will emerge over the western Atlantic over the next few days and has a 30 percent chance of some development as it continues eastward. Neither system poses a threat to the Gulf Coast.

The Explanation: The axis of a shortwave trough of low pressure aloft will stay positioned over the region through Friday. Atmospheric moisture will remain elevated. With no real change in the setup compared to Thursday, a similar weather scenario can be expected. Heavy showers and thunderstorms will develop near marine breezes and any weak disturbances in the northwesterly flow aloft could also push some storms in from that direction. Any collisions between storm outflow will serve as breeding grounds for further development. On Saturday, the trough will release a bit to the east, relieving some of the available instability and forcing, but daytime warming and marine breezes will stay spark isolated to scattered storms. Nights will be quieter, but muggy. A few more shortwave troughs will dig into the existing trough over the Southeast and really amplify the pattern by the middle of next week. A blocking pattern is likely to develop—that is, a large ridge in the Western U.S. and over the Atlantic. The result will be a trapped trough over the Eastern U.S. and a few weak cold fronts may take advantage of this avenue. With one or two clearing the Metro Area, there could possibly be a few days of drier air and below average temperatures later next week.