An unusual June cold front will allow lower temperatures and humidity for most of the week. You should really feel some relief in the mornings.

Today and Tonight: A cold front will be moving into the Gulf of Mexico today, pushing dew point temperatures into the 60s tonight. A stray afternoon of thunderstorm is possible but most should stay dry. Highs will be in the 90s but those lower dew points will allow overnight lows to slip into the 60s.

Hey,"turn that frown, upside down!" An unusual June drop in humidity will have it feeling much better for the middle of the week! #LaWX #MsWX pic.twitter.com/vQTl1DvdF0

Up Next: Very dry air is behind the cold front, which will bring cooler and more pleasant weather across the Gulf Coast through much of the workweek. High temperatures will hover in the mid 80s starting Tuesday, with lows in the mid-60s! An area of low pressure stalled over the east coast will keep northerly winds driving cooler air into our region. That will change by weekend with enough moisture returning for showers and thunderstorms to flare in the afternoons. 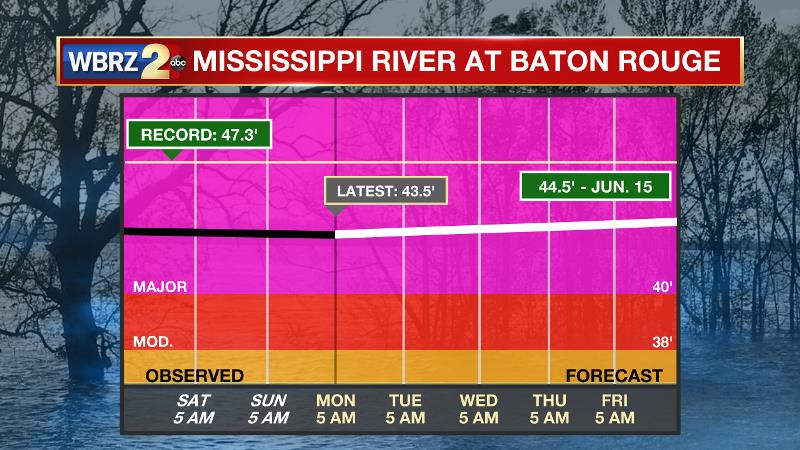 The Mississippi River: At Baton Rouge, major flood stage continues with a level of 43.5’ as of Monday morning. Peaking at 44.1’ on March 19, the river set its 7th highest recorded crest at Baton Rouge. At 152 days, this year marks the longest period above flood stage at Baton Rouge. With continued heavy rain events in the Midwest, runoff will result in a second, higher crest in early June. The current forecast is for the level to reach 44.5’, which would be one of the top five highest crests on record. The Morganza Spillway may be opened to mitigate flood risk downstream into the Baton Rouge area. This will increase water levels over unprotected areas over the Atchafalaya Basin. If you have property or interests in the floodway, for specific inundation levels, you are encouraged to visit this link. On the Mississippi River, the high water will remain an issue for river traffic and river islands, although some inundation will continue for unprotected low-lying areas. The city of Baton Rouge and the main LSU campus are protected by levees up to 47 feet. Some soggy areas and seepage may be noted due to the long duration of high water placing pressure on the levees. As some of the Mississippi River diverts into the Atchafalaya River, gauges at Krotz Springs and Morgan City will stay high as well. This creates backwater flooding in parts of Assumption Parish in areas such as Bayou Chene, Stephensville and around Lake Palourde.

A cold front is slipping southeastward through Louisiana and Mississippi as of Monday morning. Ahead of the front, sinking air will lead to another warm afternoon with high temperatures in the 90s. However, a few days of northerly winds will resulted in a drier air mass and this front will struggle to stir up more than an isolated shower on Monday afternoon. The dry, northerly winds will continue behind the front with a more pleasant air mass surging into the region overnight. By Tuesday morning, lower humidity will be apparent with air temperatures having room to drop into the 60s. Through Thursday, expect highs to stay in the mid 80s and some really comfy morning in the mid 60s. A reinforcing front may aid this early Wednesday. Alas, it is climatological summer and the dry air will give way to Gulf moisture by Friday. Southerly winds will increase and fling humidity inland. Showers and thunderstorms then enter the forecast and other than an initial surge of showers with the returning moisture Friday night, a more normal diurnal rain cycle should emerge through the weekend.