Chilly air is out for the better part of a week. There will be several days with rain chances on the board.

Today and Tonight: On Tuesday, temperatures will rise into the mid to upper 70s. Showers and even a few thunderstorms are likely as a storm system moves into our region. Activity should reman isolated to scattered and a full washout is not expected. There is an outside shot at one or two strong thunderstorms—especially as coverage increases during the afternoon and evening hours. Activity will continue overnight with temperatures in the mid 60s.

Up Next: A weak cold front will push the last of the rain through on Wednesday morning before stalling along the coast or just offshore. This stall will result in some clouds lingering Wednesday and perhaps through Thanksgiving. However, the front will not cause major changes in temperatures. Average, or even above average, temperatures are anticipated. As far as Thanksgiving travel is concerned, a significant storm system could cause delays in the Mountain West due to snow and Southwest U.S. due to rain. Windy conditions are anticipated in New England. Back home, Friday and Saturday will be warm with high temperatures approaching 80 degrees prior to the next cold front. That frontal system is pegged for late Saturday and will need to be monitored for multiple reasons—including the possibility of strong storms and timing implications for LSU and Southern football.

The weekend forecast includes a front with rain and possibly strong storms. Timing (Sat. or Sun.) is not clear yet, but obviously, this needs watched for #LSU and #Southern football. (2/2) pic.twitter.com/6c3nUAwvM9

A surface high pressure system near Florida is pushing warmth and moisture from the Gulf onshore across the local area. In response to a deep upper level trough over the Mountain West, a frontal system has developed with a surface low over Colorado and a cold front trailing to the south. This system will be the primary factor in local weather through Wednesday. The returning moisture has saturated the atmosphere and allowed clouds to thicken. Scattered, fast-moving showers will be around from the late morning into the late afternoon hours, but it will not be raining for most of the day. Increasing coverage of showers and thunderstorms is expected as the cold front approaches this evening. There is enough instability and even wind shear to support strong thunderstorms; however there will be an absence of significant triggering mechanisms will the most favorable ingredients are present. Therefore, the Storm Prediction Center has highlighted the northwestern third of the forecast area in just a 1 out of 5 “marginal risk” for severe weather. 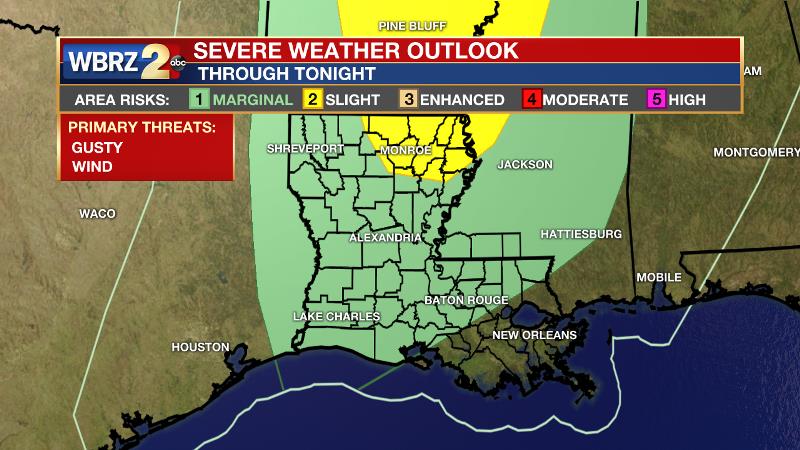 A broken line of rain and thunderstorms will pass through the area overnight through daybreak on Wednesday. The front should crawl just far enough into the Gulf of Mexico by Wednesday afternoon to shut showers down in the Baton Rouge area. Behind the front, temperatures may cool by a few degrees late Wednesday through Thanksgiving, but it will not be nearly as chilly as Saturday and Sunday. An upper level ridge will build over the Southeast U.S. on Friday and Saturday causing well above average temperatures. Timing the next storm system will be critical to several outdoor events on Saturday. At the moment, a frontal system is pegged to return showers and thunderstorms as early as Saturday afternoon, though the forecast model trends are indicating that a slowing system could push this back. Additionally, this system will need to be monitored for the possibility of severe weather.