Standard summer will be served up through the 7-Day Forecast. As is common this time of year, forecast focus is on the tropics.

The Tropics: Tropical Storm Fred formed just before 10pm Tuesday. West of the Leeward Islands in the Caribbean Sea with maximum winds of 40mph, this system was moving west at 17mph. Fred will scrape across the Caribbean Islands through the week, likely making additional strengthening slow. Intensity guidance (pictured left, below) mostly keeps the storm around tropical storm strength. An upper level ridge of high pressure centered over the Atlantic Ocean and the clockwise wind flow around it will cause the storm to move west-northwest and then more north-northwest over the next five days. Track guidance (pictured right, below) places this system in the eastern Gulf of Mexico by the end of the weekend. It does not appear to pose a threat to the local area at this time. The current thinking is that this system will start to work northward near the peninsula of Florida as a tropical storm. 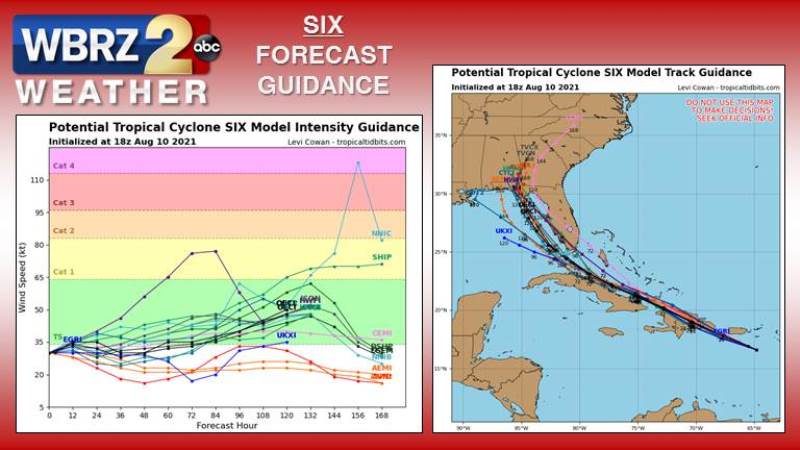 Next 24 Hours: Any showers will diminish after sunset. Beneath mostly clear skies, low temperatures will fall back into the mid 70s. It will stay muggy. Wednesday will be warm and humid with high temperatures charging for the low 90s. Mostly sunny skies are expected through the first half of the day followed by isolated, afternoon showers and thunderstorms.

Up Next: Those PM pop-up showers and thunderstorms will become a bit more common by the end of the week. For the 13 Parish, 3 County Forecast Area, rain coverage will be around 40 to 60 percent Thursday through Saturday. As for temperatures, highs will be near 92 with lows near 75. Sunday and beyond may ultimately depend on the exact track of Potential Tropical Cyclone Six. Even though it may not directly impact the local area, where it ends up will determine if our weather stays unsettled or dries and cools a bit.  CLICK HERE for your full 7-Day Forecast.

The Explanation:  Atmospheric moisture is expected to remain a little below average through the middle of the week which will stand in the way of widespread torrential thunderstorms. Still, there is enough heat and humidity this time of year to provide plenty of instability for isolated, afternoon showers and thunderstorms to develop. That humidity will combine with high temperatures in the low 90s to produce feels-like temperatures near 105 degrees each afternoon. Toward the end of the week, an upper level ridge over the Southeast will begin to erode due to a trough moving across the northern half of the country and an upper level low associated with a tropical system approaching from the western Atlantic Ocean. Days that feature ample moisture will lead to more scattered showers and thunderstorms through the weekend. Sunday and beyond will be dependent on the eventual fate of Potential Tropical Cyclone Six, which does not appear to pose a threat to the local area at this time, but it is too early to eliminate that possibility.