Not forecasting any total washouts for your workweek but you should keep the umbrella handy.

Tonight & Tomorrow: Showers and storms clearing out of the Capital Area now. Overnight some light cloud cover will linger as temperatures fall into the mid-70s. To start your Monday you will not need your rain gear but some showers will be popping into the forecast during the afternoon hours. Temperatures are going to peak in the low-90s and feels like temperatures will be nearing triple digits. Shower activity will be most active in the afternoon hours. Showers and storms have the potential to produce a heavy downpour, frequent lightning, and gusty winds. Overnight temperatures will fall into the mid-70s and the wet pattern is set to repeat for the rest of your workweek.

Up Next: Tuesday will start off with mostly sunny skies and temperatures in the 70s. Quickly temperatures will heat into the high-80s and showers will begin bubbling up across the Capital Area. Not expecting very much change in the rainy pattern for your workweek. Waking up to temperatures in the mid-70s. Daytime highs will top out in the low-90s with showers bubbling up during the afternoon hours. Overnight temperatures will cool back into the 70s. Localized areas could see heavy downpours and some poor street and drainage flooding after repeated rounds of rain. Click here to see the 7-day forecast.

Storm Station meteorologist are monitoring four potential areas of development in the Atlantic and Caribbean. No direct threats to the Gulf coast as of the 4PM tropics update. 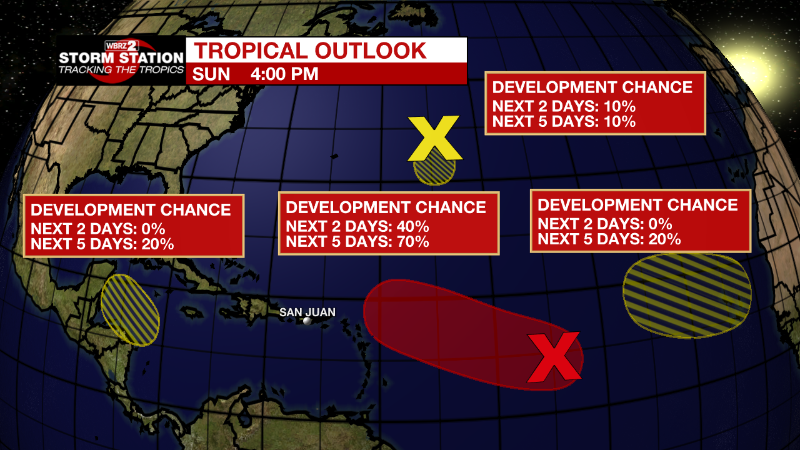 Central Tropical Atlantic:
Recent satellite-derived wind data indicate that a broad area of
low pressure located over the central tropical Atlantic Ocean is
producing winds to near gale force, but the circulation remains
elongated with an ill-defined center.  Although environmental
conditions ahead of the system do not appear conducive for
significant development, a tropical depression, at the very least,
is likely to form later this week while moving slowly toward the
west and then west-northwest at 5 to 10 mph, toward the waters east
and northeast of the Leeward Islands.
* Formation chance through 48 hours...medium...40 percent.
* Formation chance through 5 days...high...70 percent.

Central Subtropical Atlantic:
A small low pressure system located about 600 miles east of Bermuda
is producing limited shower activity.  Strong upper-level winds and
dry air are expected to limit significant development of this system
while it drifts southward over the central Atlantic during the next
couple of days, and the low is likely to dissipate by midweek.
* Formation chance through 48 hours...low...10 percent.
* Formation chance through 5 days...low...10 percent.