Warm conditions will carry into the first week of June, as we would expect. Also, as hurricane season begins, a system close to home warrants some attention.

Today and Tonight: The new week will begin with clouds and some sunshine. A few showers over the coastal areas during the morning hours could try to drift inland but should encounter a dry environment for anything widespread or long lasting to occur. Areas that receive a bit more sunshine will take a run at 90 degrees; otherwise, expect lows in the upper 80s. Overnight will be partly cloudy with lows near 70. 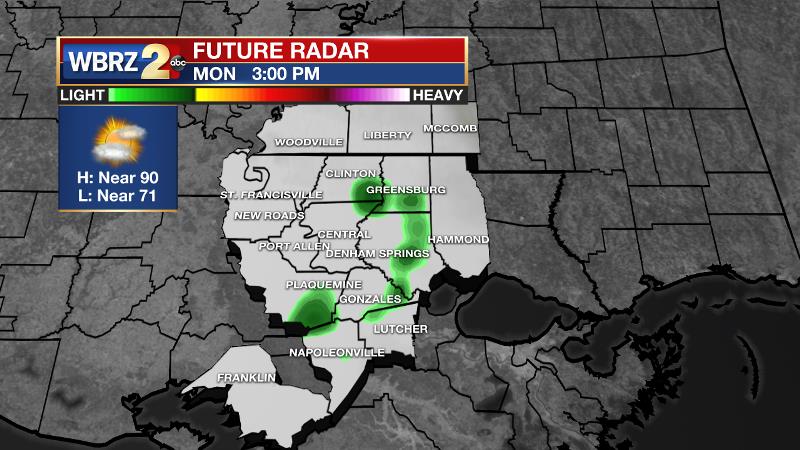 Up Next: Isolated, afternoon showers and thunderstorms will return to the forecast on Tuesday followed by an uptick in the action due to some tropical moisture on Wednesday. The workweek will end with the standard warmth and humidity followed by pop-up afternoon showers and thunderstorms. Into next weekend, the local forecast will depend on the tropics as a pending system could spew heavy rain over a portion of the Gulf Coast states. However, it is too early to be sure if that system will even survive, let alone any specifics. Stay tuned, today is the first official day of hurricane season.

The Tropics: The remnants of Tropical Storm Amanda from the Pacific Basin were located inland near the Guatemala-Yucatan Border as of Monday morning.  This system could emerge over the Bay of Campeche by this evening. If the remnants do stay intact and move back over water, environmental conditions appear conducive to support some development, and a new tropical depression could form while the system remains nearly stationary through the middle of this week. Regardless of tropical cyclone formation, heavy rainfall is a threat that portions of the central Gulf Coast could face by next weekend. The National Hurricane Center has given a 80 percent chance of formation over the next 5 days.

An upper level ridge will move over the South Central U.S. on Monday providing a drier atmosphere and a continuation of warm, partly sunny afternoon skies. In response to some sun, high temperatures will rise into the upper 80s and low 90s. That ridge will sneak eastward on Tuesday allowing an upper level low to penetrate the region from the west. Winds will shift onshore and the associated moisture return will work with the instability from the upper level low to create diurnal convection. A more robust slug of tropical moisture will surge north through the Gulf on Wednesday leading to an even greater uptick in showers and thunderstorms. That moisture will depart for Thursday and Friday with typical daytime heating/marine breeze afternoon showers and thunderstorms expected. Beyond that, the local weather will be highly dependent on the eventual evolution of an area of tropical low pressure currently over the Yucatan Peninsula near the southern Gulf of Mexico. As of now, the expectation is for this system to emerge over the Bay of Campeche and slowly develop through the upcoming week. The subsequent track ranges from due west into Mexico to northeast and toward the central Gulf Coast. Obviously, that is a wide range of potential outcomes that just will not become clearer until this system actually develops further, if that happens at all. The low first must clear substantial terrain and make it make over open water before much stock will be put into a more precise forecast. At this time, the low is worth attention though as it could bring a heavy rain threat to part of the Gulf Coast if it survives.
--Josh