Heavy thunderstorms will remain possible for the rest of the workweek. Be alert to deeper water on any flooded roads.

Next 24 Hours: Leftover showers and thunderstorms will gradually end through the evening hours with skies clearing a bit after midnight. Expect low temperatures near 73 degrees. Into tomorrow, an unstable, tropical air mass will result in another round of scattered to widespread showers and thunderstorms. Downpours could lead to localized poor drainage flooding. Thanks to the added clouds and rain coverage, high temperatures will peak near 87 degrees.

30-60% - Scattered: part to half of the area receives measurable rain

60-100% - Widespread: almost all of the area receives measurable rain

Keep in mind, those chances tell nothing about timing. For instance, 100% DOES NOT mean it will rain all day. We will be sure to provide information in our forecasts as to when you can expect rain when chances are on the board. MORE: https://www.wbrz.com/news/a-chance-to-remember

Up Next: Repeated rounds of thunderstorms could cause some areas to oversaturate and therefore have poor drainage flooding issues through Friday. On average, most of the forecast area will pick up another one or two inches of rain by the end of the workweek, but some isolated amounts doubling that are possible. Over the weekend, a slightly drier air mass will move into the region. While this will not eliminate activity, it will cause showers and thunderstorms to be more isolated in coverage and replace the heavy rain threat with a chance for gusty wind. As we expect, drier days are hotter days. CLICK HERE for your detailed 7-Day Forecast. 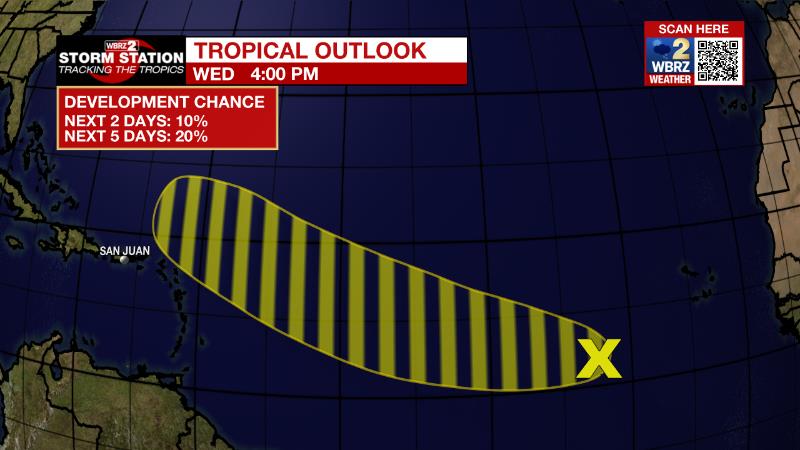 The Tropics: Several hundred miles southwest of the Cabo Verde Islands, showers and thunderstorms continue to decrease in association with a tropical wave. There is just a twenty percent chance of formation as the system moves west-northwestward at 15-20mph across the tropical Atlantic.

The Explanation: A weak upper level trough of low pressure, inverted in orientation from south to north continues to press from east to west across the northern Gulf of Mexico with a slug of tropical moisture. These features will be responsible for scattered to widespread heavy thunderstorms for the next two afternoons. On top of the upper level conditions, a weak surface boundary--essentially a trough of low pressure--will settle south toward the I-10/12 corridor while dissipating through Friday. This boundary, while weak, will serve as a focus for additional development of showers and thunderstorms. Well above moisture content will stay in the atmosphere and so the threat for heavy rain and localized flooding will be around through the end of the week. On Saturday, the upper level trough will be well west of the area while an upper level ridge of high pressure over the Mountain West squeezes southeastward and overhead. This will place the local area on the eastern fringes of the ridge setting up a northwesterly wind flow aloft. While the atmosphere will dry, resulting in fewer showers and thunderstorms on the whole, that dry air could be ingested by any thunderstorms that do develop to produce gusty winds. There are some signs that at least Monday, if not a day on either side, could stay mostly dry thanks to the lack of overall moisture in the atmosphere. Of course, on these days with less and later convection, high temperatures will go well into the 90s.