BATON ROUGE - On Wednesday morning, amid storm-related road closures and a lengthy Flash Flood watch for the region, residents across south Louisiana are wading their way through yet another day of rain.

Reports of hail near Baton Rouge's Gardere area crept into many a social media timeline around 9 a.m., Wednesday morning.

Would not be surprised if hail is falling across parts of EBR. Let us know what you’re seeing! pic.twitter.com/p0ZmQbY17D

Shortly thereafter, hail was reported in other parts of the capital area.

One viewer sent in pictures of hail from Ascension Parish, near the Baton Rouge General medical center in Prairieville. 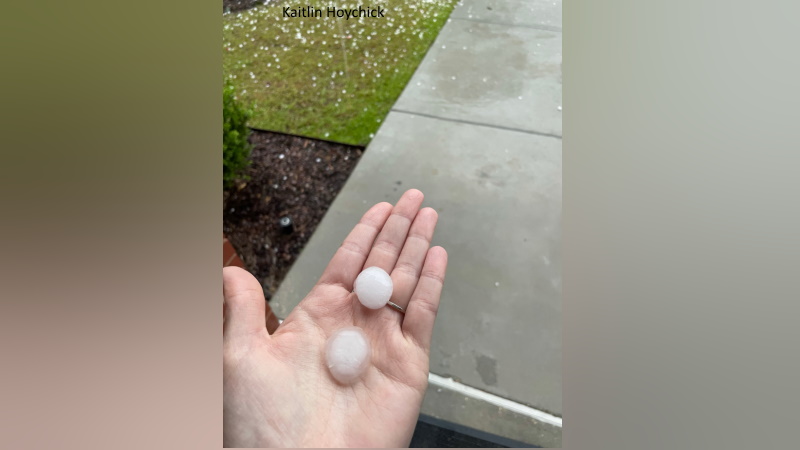 And as the downpour continues, it looks as though the day is turning out to be little more than a repeat of Tuesday's bad weather.

Storms brought strong winds and hail to some parts of the area, Tuesday. Weather experts say Sorrento saw the most rain on Tuesday, with area reports of up to five inches of water from the downpour.

With Wednesday marking the second day of severe weather this week, earlier forecasts predicted that storms may bring a reappearance of strong winds and hail.

But flooding was touted as a primary concern, with residents across the WBRZ viewing area still under a Flash Flood watch that will likely remain in effect until Thursday.

As of 6:30 a.m., Wednesday, just over 5,000 were without power across the state, according to a local outage map. The majority of outages were in Jefferson Parish and Lafourche Parish.

According to Total Traffic and Weather Network, LA 441 between LA 442 and Hwy 16 are closed as a result of downed trees and power lines.

2une In Meteorologist, Marisa Nuzzo is monitoring the severe weather threat closely and will update viewers throughout the morning.

In preparation for more heavy rains, officials in some areas are making sandbags available to the public.

Stephensville Park will serve as a self-service sandbag location, and some public works personnel may be on-site Wednesday morning.

LCG has several sandbag locations open across the parish:

-Sandbags are available at the Yambilee Building at 1939 West Landry (US 190) in Opelousas.

WBRZ’s Weather Team will be monitoring today's weather on a continual basis, and they can be followed on Facebook and Twitter for frequent updates.