After a chilly weekend, expect moderating temperatures through Wednesday. A strong storm system will move into the area on Thursday.

Next 24 Hours: Beneath clear skies, low temperatures will slip into the mid 30s overnight. Tuesday will be another afternoon with ample sunshine and high temperatures in the upper 60s. Winds will shift southeast at 5-10mph.

Up Next: Transitional weather is expected on Wednesday. Clouds will increase later in the day after high temperatures reach into the mid 70s. A few showers will be possible overnight as cold front approaches from the west. On Thursday, morning temperatures in the mid 60s will warm just a few degrees into the mid 70s by the afternoon. Expect showers and thunderstorms to increase in advance of the front with rain chances highest immediately along the front during the afternoon hours. At that time, one or two storms could turn strong. Behind the cold front, temperatures will drop back below average starting Friday in the low 40s and only recovering into the 50s later in the day. Cooler temperatures will stick around Saturday as well. CLICK HERE for your detailed 7-Day Forecast.

The Explanation: A surface high pressure system centered over the central Gulf of Mexico will promote quiet weather conditions through Tuesday. By Tuesday night, the high will shift east and allow winds ton become onshore out of the southeast. This will not only continue a warming trend in temperature but increase moisture across the area. It is possible that the advancing moisture with cold land and lake temperatures results in a bit of fog on Wednesday morning. By Wednesday night, an upper level trough and its associated cold front will start to push in from the west allowing a few showers to develop. These showers will be shallow in the atmosphere and are unlikely to be heavy or long lasting. 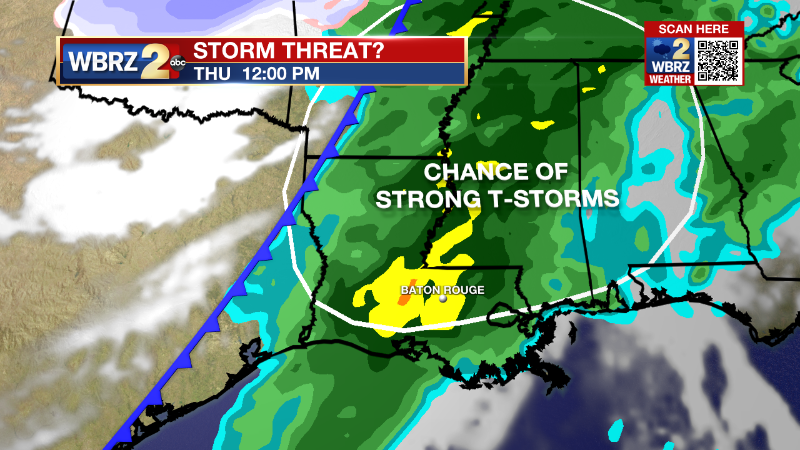 Over the last few days, the trend in forecast models has been for the upper level tough and associated surface low to pass farther and farther north of our area, in turn reducing, but not eliminating, the threat for severe thunderstorms. While wind shear will be impressive, strong upper level winds and instability will be less favorable for severe thunderstorms. Ongoing clouds and showers will decrease the amount of instability. Lift created by strong upper level winds will primarily be north of the area. With all of that being said, the ingredients not being zero, parts of the area, especially north of I-12 can expect to be highlighted in a risk area for severe weather by the Storm Prediction Center. The cold front will push through during the late afternoon and early evening hours, ending that threat from west to east. Northwest winds behind the front will usher in much colder and drier air for the end of the week and the start of the weekend. One item to watch: a few forecast model solutions suggest the front will retreat north and cause a couple of showers on Saturday.