A gradual warming trend will take hold for the end of the week. By the weekend, showers and thunderstorms reenter the forecast. All local rivers (not including the Mississippi and Atchafalaya) will be below flood stage by Wednesday night.

Today and Tonight: It will remain quiet out there this Wednesday afternoon. With ample sunshine, expect your high temperature to warm into the mid 80s. Humidity should still be at bay. Overnight will be clear and closer to average with a low temperature in the mid 60s.

Up Next: Surface high pressure will shift our east by Thursday, helping to increase high temperatures and dew points, meaning some higher humidity will take hold beginning Thursday. Highs will approach the 90s Friday and Saturday, before a weakening cold front returns the possibility of showers to the region Saturday afternoon through Sunday. This system does not look like a major threat but recall that any warm season storm can produce downpours and frequent lightning. Forecast models are showing signs that our first string of hot days may come next week into Memorial Day Weekend. 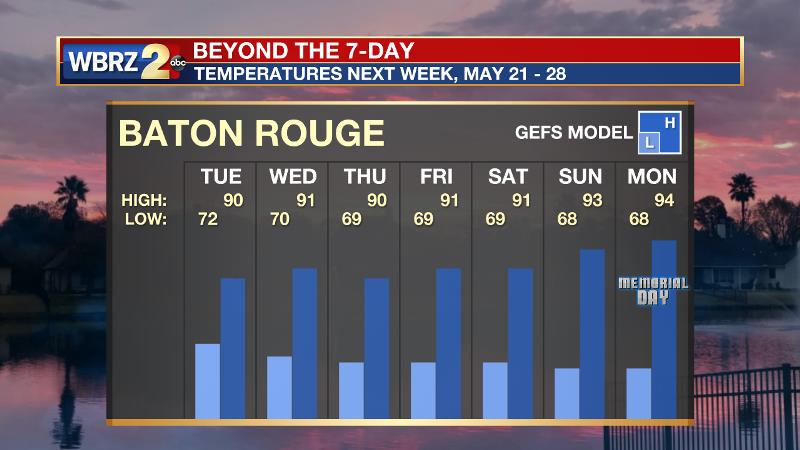 As the local area moves toward a summer weather pattern, SEVERE WEATHER will be a significant threat to the Midwest. HERE is a look at the pattern shift.

The Mississippi River: At Baton Rouge, major flood stage continues with a level of 43.2’ as of Wednesday morning. Peaking at 44.1’ on March 19, the river set its 7th highest recorded crest at Baton Rouge. In addition, at 130 days this marks the second longest period above flood stage. Projected at about 44’, this second crest could challenge the first earlier this year. Still, the high water is primarily an issue for river traffic and river islands, although some inundation will continue unprotected low-lying areas. The city of Baton Rouge and the main LSU campus are protected by levees up to 47 feet. Some soggy areas and seepage may be noted due to the long duration of high water placing pressure on the levees. As some of the Mississippi River diverts into the Atchafalaya River, gauges at Krotz Springs and Morgan City will stay high as well. This creates backwater flooding in parts of Assumption Parish in areas such as Stephensville and around Lake Palourde. Like Big Muddy, this is expected to be a prolonged event but is not uncommon for the time of year.

With a broad area of high pressure strengthening over the Southeast, and winds shifting southeasterly we will continue to warm up Thursday and Friday but remain dry. A shortwave trough will move across the Midwest and Mid-Mississippi River Valley Saturday and Sunday. Initially, this may allow just enough instability for some showers and thunderstorms to develop on Saturday afternoon with the daytime warmth. By Sunday, the axis of this trough may serve as a better forcing mechanism for scattered showers and thunderstorms. While warm season storms can bring downpours and brief ponding of water, ingredients don’t seem to be there for flash flooding or severe weather. It is possible the trough even brings a weak front into the area, which would aide in development and coverage of precipitation.  Even if there is a front, a clean passage and cool down is not expected. In fact, temperatures are more likely to go the other way next week. A stronger upper level ridge is expected to overtake the region leading to ample afternoon warming and the first string of days in the low to mid 90s may be in store. Here it comes!