Area thermometers will take a run at 80 degrees prior to the next cold front. Some showers could linger into the first few hours of the weekend.

Today and Tonight: Thursday will once again be mild with high temperatures making into the upper 70s. A few locations that receive more sunshine could snag 80 degrees. A general increase in cloud cover is expected through the day and that will continue overnight. Well above average low temperatures in the low 60s are anticipated in response to southeast winds. 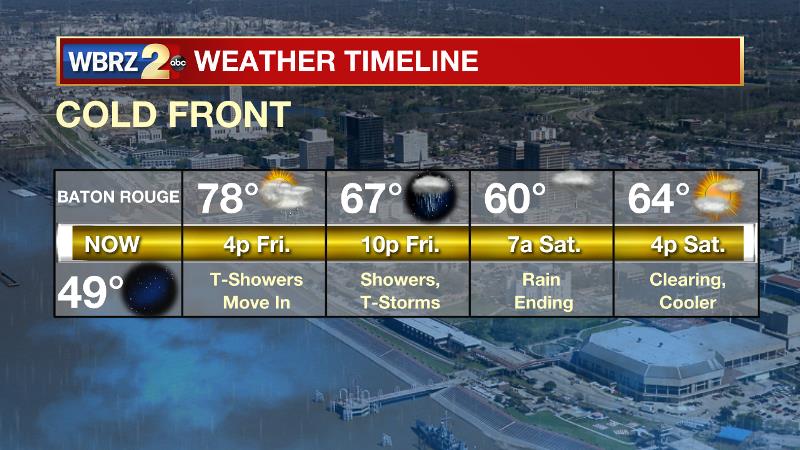 Up Next: Temperatures will remain mild on Friday ahead of a frontal system moving into the region. This system will return showers and possibly thunderstorms by Friday afternoon and evening. As the cold front crawls through the area, showers could linger a few hours after sunrise on Saturday. Though tailgaters may have to dodge drops early, LSU Football fans should not need to take ponchos into Tiger Stadium. Do plan to dress in layers as morning temperatures in the mid to upper 60s will fall into the low 60s and upper 50s by sunset. Clearing skies are expected Saturday night, setting up a cool and dry Sunday. The lowest temperatures of the forecast period will come on Monday morning, with lows in the upper 30s and low 40s.

The Tropics: Tropical Storm Sebastien is well northeast of Puerto Rico. Maximum sustained winds are at 60mph with a minimum central pressure of 999mb. The storm is moving north at 5-10mph as is expected to turn northeast later today. Sebastien may strengthen into a category one hurricane while accelerating across open waters Friday into the weekend.

Moisture streaming across Mexico from the Pacific will allow high clouds to build up through Thursday. Overnight, southeast winds from the Gulf of Mexico will add moisture to the lower levels, which will allow low clouds to increase and low temperatures to remain in the upper 50s and low 60s. A deep, cut-off low pressure system across the Southwest will soon merge with an upper level trough moving in from the Pacific. This system will move across the United States dragging a cold front through the local area. Continued onshore flow ahead of that system will result in enough moisture for showers to develop by Friday afternoon—especially in areas north and west of Baton Rouge, closer to the approaching cold front. Instability and lift along the front should be sufficient to create an embedded thunderstorm or two Friday afternoon and night, but parameters are not favorable for severe weather. The latest thinking on timing is that the front will clear the area by Saturday afternoon, effectively ending rain chances. Temperatures will fall from the mid to upper 60s on Saturday morning to the upper 50s and low 60s by afternoon. Lows will fall into the low 40s by Sunday morning. Dry and cool conditions with temperatures 5-10 degrees below average are expected Sunday and Monday.  Forecast model guidance has backed off on the strength of the subsequent storm system expected next week. A mid-level trough of low pressure will move into the region on Tuesday creating a round of showers and thunderstorms. 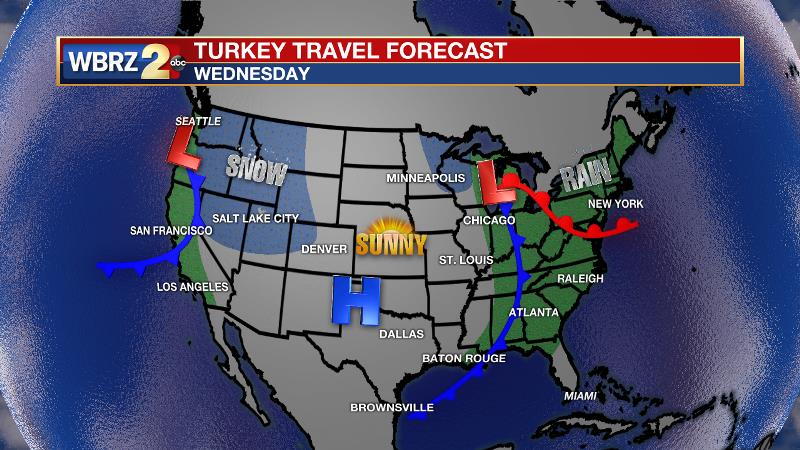 Whereas there was previously a concern for some severe weather in this event, those chances seem to have diminished. A weak cold front may accompany this system, pushing temperatures slightly below average heading into the middle part of next week.