The unpleasant conditions will linger into the weekend. More sunshine will be available for Sunday and Monday. There continues to be a lot of uncertainty with regard to temperatures next weekend with possibilities ranging from the mid 20s to the upper 40s.

The Next 24 Hours: Though the rain should taper to showers, precipitation will continue overnight. Temperatures will not move much with lows ultimately ending up in the low 40s. Unfortunately, clouds, scattered showers and cool temperatures are expected through Saturday. The showers should be a little more intermittent than Friday and this will give highs a chance to move into the mid 50s.

After That: A weak, reinforcing front is expected to graze the region Saturday night. Associated drier air will rid the region of rain and allow some sun on Sunday and Monday. Both days, expect lows near 40 and highs above 60. Readings will moderate with highs near 70 Tuesday and Wednesday. As moisture increases, clouds and showers will return ahead of the next cold front. The forecast for the end of next week is challenging and uncertain at this time. Very cold air locked up to the north could dislodge and head south Thursday or Friday. Beyond that, and beyond a reasonable forecast window for good predictability, forecast models are showing low temperatures that range from the 20s to 40s next weekend. Since the colder temperatures have been the more consistent outcome, we continue to favor that. The chance for wintry precipitation has lessened, but is not zero. Expect a lot of changes and variability to this part of the forecast, so check back for updates. CLICK HERE to view your complete 7-Day Forecast.

Increasing chances for cold to very cold temperatures toward the end of next week and next weekend. Chances for wintry precipitation are all over the place but certainly non-zero. #LaWX #MsWX pic.twitter.com/3AHNzlI3wc

The Explanation: A stalled boundary is likely to stay put through Saturday. With southerly winds in the upper levels, moisture will continue to ride over cool surface air. This combination will result in continued clouds, showers and below average temperatures into Saturday morning. A surface low will ride along the front, dragging some warmer air inland to around I-10 and causing a large north to south difference in temperatures. An upper level disturbance will kick through the area late Saturday enhancing the showers. Once that disturbance clears, and a second cold front provides a glancing blow on Sunday morning, drier air will provide a period of mainly clear skies. Next week is likely to begin with slightly above average temperatures. A series of fast moving shortwave troughs will return clouds and some rain chances Monday night through Wednesday. A broad upper level trough will be draped across the northern third of the country and lock the colder air up there with it. Once that upper level trough does release, the cold air that builds up behind it will likely be advanced south and this could happen toward the end of next week. It looks like a front will arrive with rain and maybe even thunderstorms on Thursday. Predictability goes haywire at this point. 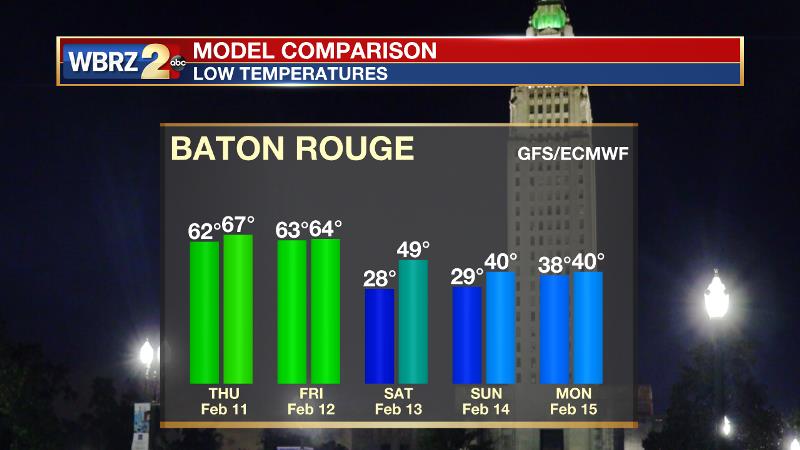 The American forecast model continues to suggest that a very cold air mass will invade Friday night and Saturday with lows possibly dipping into the 20s. The European forecast model previously had lows in the teens and has now turned around to show lows in the upper 40s! These wild swings result in our forecast leaning more on the consistency of the American model. Additionally, and viewed with even less confidence, is the potential for frozen precipitation. The models have trended markedly drier but it is still early for a definitive call on this aspect of the forecast. Clarity will come with time and that should be the case by early next week.