A disturbance will cross over the area on Tuesday evening with some showers and a few thunderstorms. We are watching a strong front, which will bring much colder temperatures for the weekend.

?? ? For the second straight day, showers and thunderstorms have been scarce. Still, we hold some rain in the forecast tonight.

Next 24 Hours: As a weak area of low pressure moves through the region this evening, scattered showers and embedded thunderstorms will develop. Later in the night, rain chances will decrease as northerly winds help low temperatures into the upper 40s. If any lingering showers are around Wednesday morning, they should be closer to the coast and moving southeast through the day. Skies may even clear out late and allow some returning sunshine as high temperatures bump into the mid 60s.

Up Next: A mostly sunny sky on Thursday will help high temperatures return to the 70s. More clouds and even a shower will remain possible near the coast. Then, a strong cold front will press into the region on Friday. This system will bring increasing clouds through the day followed by scattered showers and thunderstorms during the afternoon and evening. Much colder air will follow this front. Thermometers will sink into the 30s by Saturday morning and fail to leave the 50s in the afternoon. Another freeze, several weeks past the average last freeze date, is currently forecast on Sunday morning. Numbers will rebound from there. CLICK HERE for your detailed 7-Day Forecast. 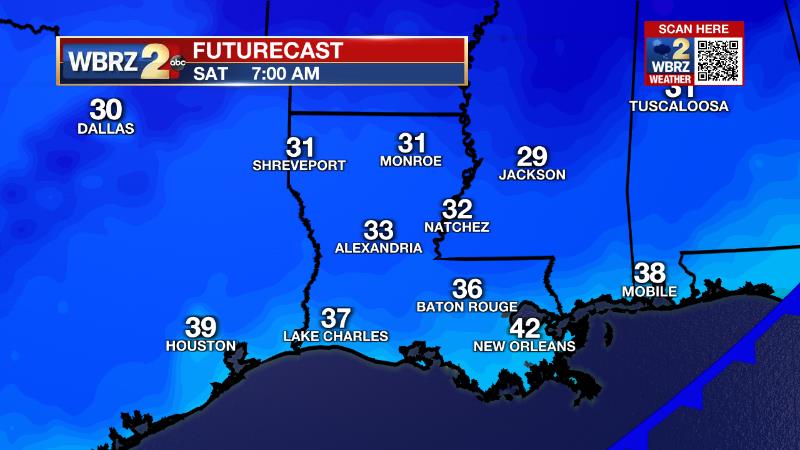 The Explanation: A weak surface low pressure system developed along a stalled cold front in the northern Gulf of Mexico will move northeast across the local area overnight. A band of showers and thunderstorms will develop in response to the low and an associated front pushing through. Once the center of the upper level trough moves northeast of the area on Wednesday, enhanced northerly winds will allow for some drying, especially away from the coast. Skies will clear a bit, especially north of I-10, by late in the day. Any sunshine will likely come too late to help temperatures rise beyond the mid 60s. Away from the coast, Thursday will bring a brief lull in precipitation with the cold front much farther south into the Gulf of Mexico, lending to a mostly dry and warmer day due to the added sunshine. A stronger trough of low pressure will barrel across the country Thursday into Friday sending the next storm system with it. A potent cold front will move into the area on the final day of the workweek. With that front, severe weather potential looks to be low but the clash in air masses should be enough to produce scattered showers and thunderstorms on Friday afternoon and evening. Strong surface high pressure will build in from the north behind the front with stiff northerly winds causing a 20 degree or more drop in temperatures. After starting the day off in the 30s, highs will have a tough time getting warmer than the mid 50s on Saturday. Even though we are past the average last freeze date, such temperatures will be possible Saturday night into Sunday, which could necessitate the need for freeze warnings since growing, has begun. As the upper level trough quickly departs, thermometers will rebound later Sunday and Monday.