The big travel day will be clear locally and around much of the country with exceptions in the Great Lakes and Pacific Northwest regions. During the morning hours, freezing fog will create issues in parts of northern Mississippi and western Tennessee. Drivers may find a few light showers along I-10 West through Houston and Eastern Texas late Wednesday. 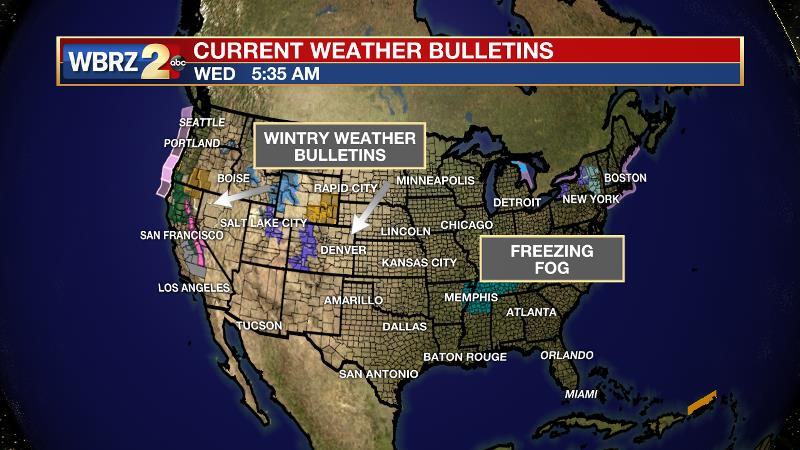 Today and Tonight: The daytime hours will feature plenty of sunshine early with some cloud cover starting to advance in from the west late. High temperatures will top out in the low to mid 60s. Overnight will be mostly cloudy and a weak disturbance moving south of the area by be able to trigger a spotty shower, especially south of I-10, before dawn. Low temperatures will be in the mid 40s.

Up Next: Expect morning clouds to give way to sunshine on Thanksgiving. Temperatures will remain just a touch below average. 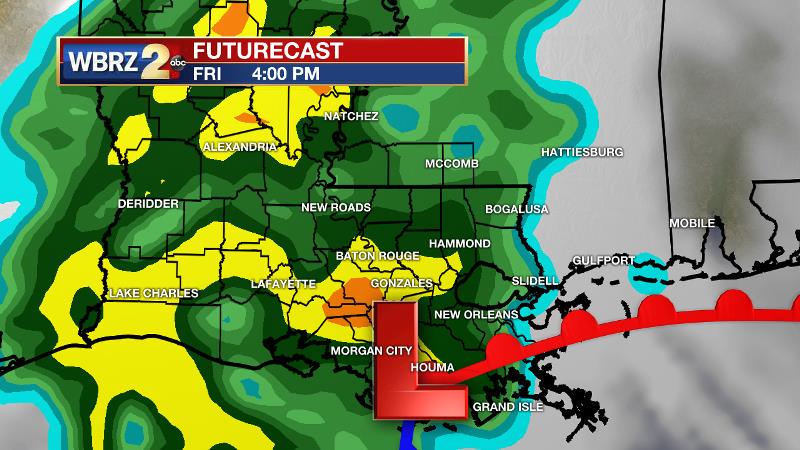 Shoppers should enjoy cool, dry weather through Friday morning but into the afternoon hours, a more potent system will bring widespread rain and thunderstorms. After a break on Saturday, another fast moving storm system returns showers to the forecast on Sunday followed by much cooler temperatures. 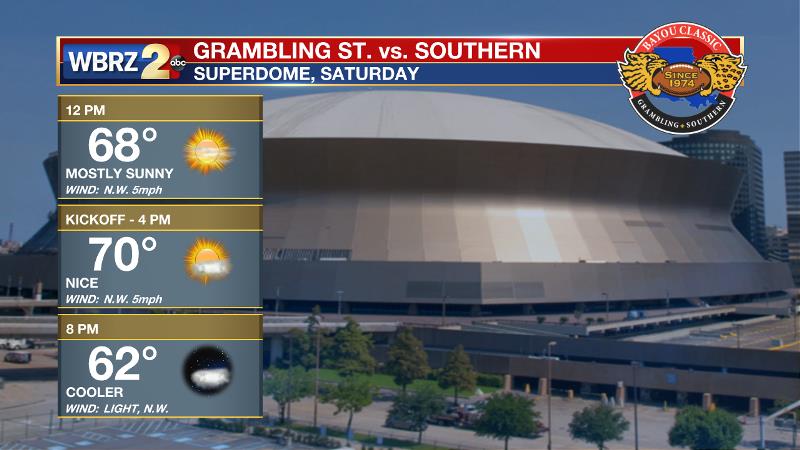 Football Forecasts: Both the Bayou Classic and the season finale for LSU will enjoy quiet weather on Saturday. In New Orleans, a partly sunny and seasonable day is expected with pre-game festivities enjoying temperatures in the upper 60s. For College Station, the Tigers and Aggies will kickoff to a temperature in the low 60s beneath partly cloudy skies.

The Tropics: With just under two weeks left in the official hurricane season, all is quiet. No development is expected in the Gulf of Mexico, Caribbean Sea or Atlantic Ocean.

Mid-level moisture will return to the area late Wednesday, as another fast-moving shortwave trough whips through the region. Expect an increase of cloud cover and possibly a few showers overnight into Thanksgiving, primarily to the south of Interstate 10. Amounts will be light with rain coverage not exceeding about 40 percent. Since this is a quick hitter, the atmosphere will dry quickly and afternoon sun in likely in many areas. High temperatures through Thanksgiving will be about 5-10 degrees cooler than Monday. Overnight lows will be around 40 degrees for the next two nights. The next in a parade of shortwave troughs will approach the area late Friday, and be east of the area Saturday morning. This system is most likely to bring a batch of showers and perhaps embedded thunderstorms on Friday afternoon. Exact track of an associated surface low will determine if temperatures get close to average or stay a few degrees below. Finally, the strongest in this batch of shortwaves will move across the center of the country on Sunday. With a more pronounced surface low expected to develop and move across Missouri, the trailing cold front will move through the area sometime late Sunday. Normally, this would pose a threat of severe weather somewhere in the lower Mississippi River Valley, but current indications are that moisture availability could be an issue. Much cooler air will arrive behind that boundary on Monday and last into the middle of next week.