A cold front will push through the area tonight with cooler and drier air to follow. Hurricane Ian will not bring significant impacts to the local area aside from increased winds and large swells—especially on offshore waters.

The combination of low relative humidity near 25 percent and winds between 15 and 20 mph with higher gusts will produce a high fire danger across the area. Any fires that develop will likely spread rapidly. Outdoor burning is not advised.

The National Weather Service has issued a RED FLAG WARNING due to critical fire conditions for the entire WBRZ Weather Forecast Area (except St. Mary Parish) from 10am to 7pm Tuesday. This includes the parishes of: Pointe Coupee, West Feliciana, East Feliciana, St. Helena, Iberville, West Baton Rouge, East Baton Rouge, Assumption, St. James, Tangipahoa, Livingston, Ascension and the counties of Wilkinson, Amite, and Pike. A Red Flag Warning means that critical fire weather conditions are either occurring now, or will shortly. A combination of strong winds, low relative humidity, and warm temperatures can all contribute to volatile fire behavior.

Many locations in the region have gone more than two weeks since measurable rain and dry conditions will continue for the duration of this week. With increased winds due to Hurricane Ian nearby in the Eastern Gulf of Mexico, favorable fire conditions could persist through much of the week.

Next 24 Hours: As a cold front settles southward into the Gulf of Mexico tonight, temperatures will respond by falling below average for the first time in about 10 days. Lows will settle near 60 degrees. Dry air and abundant sunshine are expected on Tuesday. Highs will be near 84 degrees. In combination with low humidity, north breezes of 5-15mph will result in favorable fire conditions.

Up Next: The extended forecast is looking rather pleasant. The remainder of the workweek will feature clear skies, highs in the low to mid 80s and lows in the upper 50s. If there is one negative, the area has turned rather crispy after a spell of hot, dry weather over the last two weeks. Winds out of the north and northeast at 5-15mph coupled with dew point temperatures in the 40s and relative humidity below 25% will bring an increased risk for wildfires. Burning is not advised. Winds will ease over the weekend as temperatures gradually moderate with highs in the upper 80s and lows in the low to mid 60s. Still, no rain chances are currently advertised through the early next week. CLICK HERE for your detailed 7-Day Forecast. 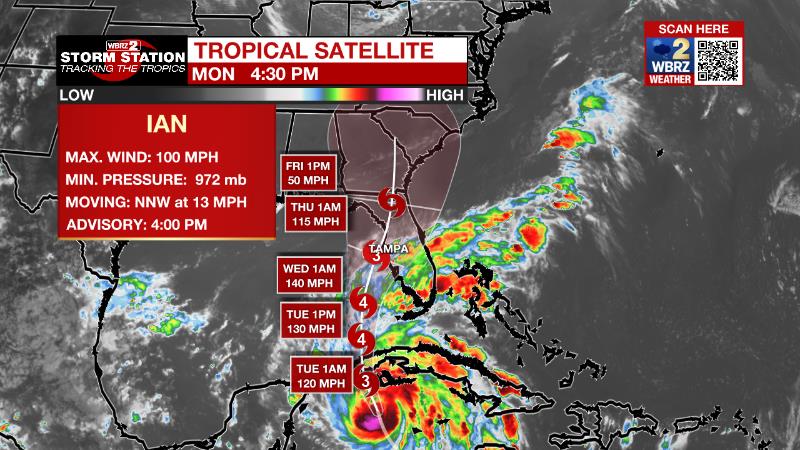 The Tropics: Hurricane Ian is rapidly intensifying with deteriorating conditions expected in Cuba expected Monday night. As of 4pm Monday, Ian had maximum sustained winds of 100mph and was moving northwest at 13mph. The storm is expected to become a major hurricane on Tuesday as it moves into the southeastern Gulf of Mexico and approach the west coast of Florida on Wednesday. Due to an expected slowing forward speed, long lasting and dangerous storm surge is possible all along the west coast of Florida, most notably in Tampa Bay. In addition, torrential rain and strong winds may batter the state for several days. Ian is expected to become a remnant low over the Southeast U.S. this weekend.

Shower and thunderstorm activity has changed little in organization today associated with an area of low pressure located several hundred miles west of the Cabo Verde Islands. Despite the proximity of nearby dry air, upper-level winds appear generally conducive for additional development, and there is a seventy percent chance that a tropical depression forms during the next couple of days as the system meanders over the central tropical Atlantic. By the end of this week, upper-level winds are forecast to become less favorable for development as the system begins to move slowly north-northwestward.

The Explanation: A cold front will continue marching south and into the Gulf of Mexico by Tuesday morning. Thermometers will move below average Tuesday morning and stay below average relative to their daypart for nearly a week. Dew point temperatures will trail off into the 40s and 50s for several days on the other side of the front. Meanwhile, winds will increase due to the pressure gradient between Hurricane Ian to our southeast and a surface high to our northeast. The breezy conditions coupled with the low relative humidity will bring a rise in fire weather conditions through Thursday. In general, winds will be around 10mph, but some higher gusts are possible, especially closer to the coast and I-55. By the weekend, the pressure gradient will weaken and allow winds to slacken as Ian moves inland and loses intensity. Temperatures will gradually moderate.