Ready to dodge but not cancel

Significant adjustments to the weekend forecast over the last few days have weekend plans looking brighter. Humidity and temperatures may be knocked back a peg on the other side of a cold front.

Today and Tonight: Highs may be just a degree or two cooler, but still in the upper 80s, on Friday thanks to a few more clouds mixing with sunshine. As the pattern begins to transition due to an approaching cold front, an isolated shower is possible, mainly west of the Mississippi River. Clouds will increase on a muggy night with lows in the upper 60s. 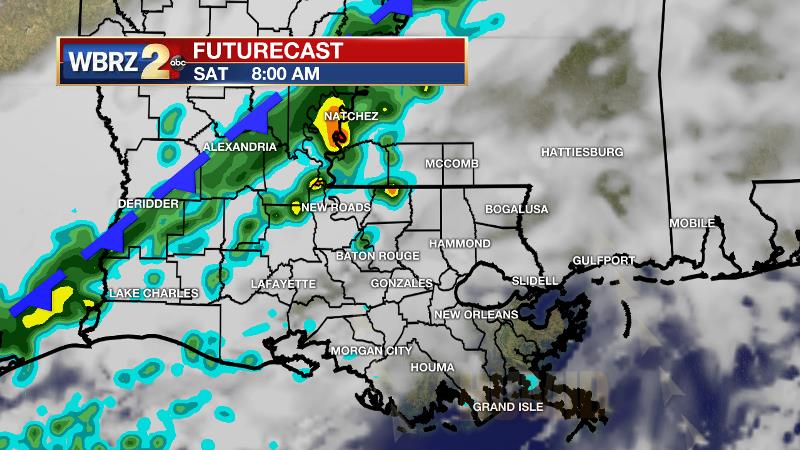 Up Next: The chances for rain on Saturday have diminished each day through the week. A weak cold front will move across southeast Louisiana and southwest Mississippi. Due to this, it will likely take daytime heating to help trigger showers. Still, only isolated to scattered activity is anticipated, and a washout is not likely. Some locations, especially south and east of Baton Rouge, could miss out on rain entirely. If you have outdoor plans, be ready to dodge but not cancel. The cold front should move south and east of the area on Sunday allowing for a drier second half of the weekend. Temperatures will only drop by two to four degrees behind the front, but humidity should be reduced through early next week.

An upper level ridge and surface high pressure system over the Southeast will begin to break down on Friday as a shortwave trough approaches from the northwest. Due to this, the atmosphere will be a bit more unstable and a spotty shower could develop, especially west of the Mississippi River. The trough will be opening and becoming positively tilted as it approaches so the attendant cold front may be slow to cross the area as it weakens. With several days of moisture building into the atmosphere, the resulting uplift from the boundary will be substantive to force showers and possibly thunderstorms to develop. However, due to the orientation of the trough and front, dynamic support will be lacking and severe weather is not anticipated. Rainfall amounts look slim as well with less than a quarter of an inch across the area. Actually, models have backed off precipitation quite a bit over the last few days, now suggesting little more than just a few showers assisted by afternoon warmth. Therefore, Saturday will not be a washout. The trough will move east on Sunday, taking the front and showers with it. Northwesterly flow will result in mainly dry conditions into the middle of next week. Temperatures will recover into the mid and upper 80s and humidity should be a touch lower than currently.