Former 'Batwoman' star says, "Shame on you" while leveling allegations against CW producers

Former 'Batwoman' star, Ruby Rose, now says her May 2020 announcement that she was parting ways with the CW series was not a decision she made of her own accord.

Rose took to social media Wednesday and posted a slew of accusations against 'Batwoman's' showrunner and several of the series' producers.

The 35-year-old Australian actress alleged that 'Batwoman's' executives forced her to leave the show after only one season, guilted her into working a mere ten days after she'd undergone serious surgery, and did nothing to improve unsafe working conditions on set, which Rose said led to several crewmembers sustaining life-altering injuries.

In her Instagram post, Rose specifically addressed showrunner Caroline Dries, executive producers Greg Berlanti and Sarah Schechter, as well as The CW, saying, “I will come for you so what happened to me never happens to another person again, and so I can finally take back my life and the truth. Shame on you.” 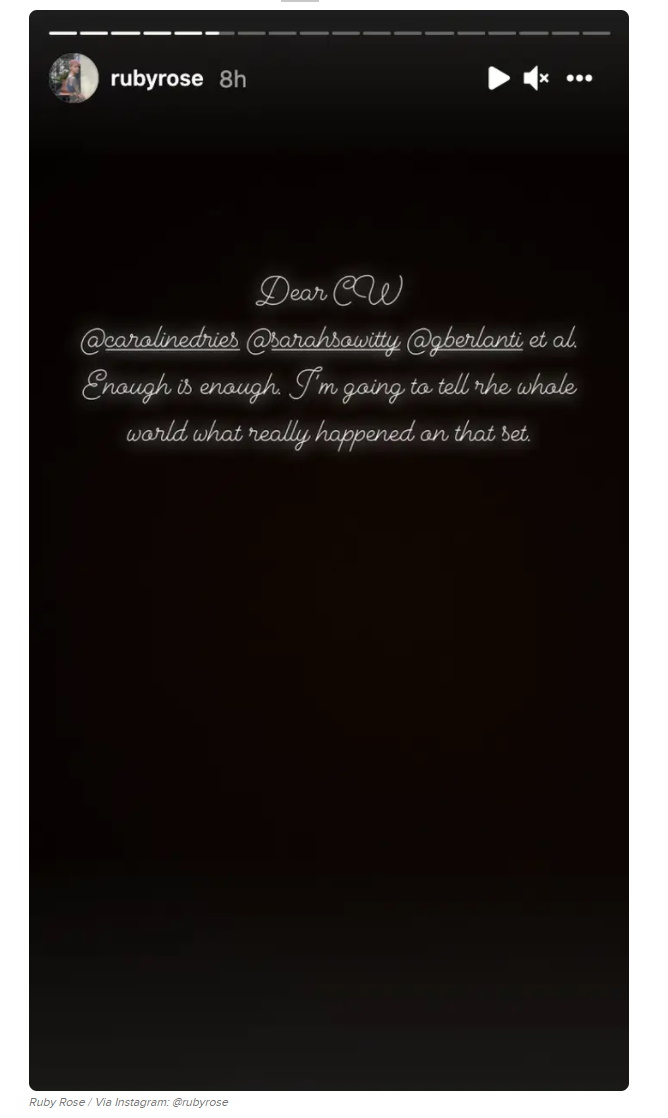 Rose claims that during the pandemic, Dries pushed crews and actors to continue filming, even after other CW and Berlanti-produced shows such as 'Riverdale' and 'The Flash' shut down due to safety concerns.

She adds that some of her co-workers experienced painful injuries as a result of hazardous working conditions on set. Rose said one crewmember suffered third-degree burns and another colleague, a production assistant, sustained an injury that led to their becoming quadriplegic.

Rose also reiterated that she did not leave 'Batwoman' of her own accord, but that she was forced out.

She said, “To my dear, dear fans still asking if I will return to that awful show, I wouldn’t return for any amount of money nor if a gun were to my head … NOR DID I QUIT. I DID NOT QUIT, they ruined Kate Kane and they destroyed 'Batwoman,' not me."

The post continued, "I followed orders, and if I wanted to stay I was going to have to sign my rights away. Any threats, any bullying tactics or blackmail would not make me stand down.”

Warner Bros. TV confirmed that Rose was terminated, releasing a statement that said the studio opted not to pick up Rose’s option for season two following complaints about her workplace behavior.

The statement said, “Despite the revisionist history that Ruby Rose is now sharing online aimed at the producers, the cast and crew, the network, and the studio the truth is that Warner Bros. Television had decided not to exercise its option to engage Ruby for season two of 'Batwoman' based on multiple complaints about workplace behavior that were extensively reviewed and handled privately out of respect for all concerned.”

Rose was cast as 'Batwoman's' lead character, Kate Kane, in August of 2018. Her separation from the series was announced May 19, 2020.

Midway through season two, actor Wallis Day joined the show as an “altered version” of Kate, who suffered injuries in a plane crash at the start of the season.