Channel 2 viewers reached out to WBRZ early Thursday to report the incident at Walker High and shared photos of the threatening message.

In the photo, red letters can be seen written on what appears to be a wall. The message states, "If you are reading this... don't come to school on Thursday. You won't regret it." The photo also included a drawing of a gun with a caption bubble that said "BANG."

Superintendent Joe Murphy said law enforcement officials received a call that same morning indicating that shots had been fired at the school, but officers later determined those sounds originated from a classroom where maintenance work was being performed on HVAC equipment.

In regard to the threatening message found in a bathroom on campus, Murphy responded with the following statement:

“Livingston Parish Public Schools is aware of threatening words that were written in a bathroom at Walker High School. In response, school officials and law enforcement officials with the Town of Walker and the Livingston Parish Sheriff’s Office are actively investigating the matter." 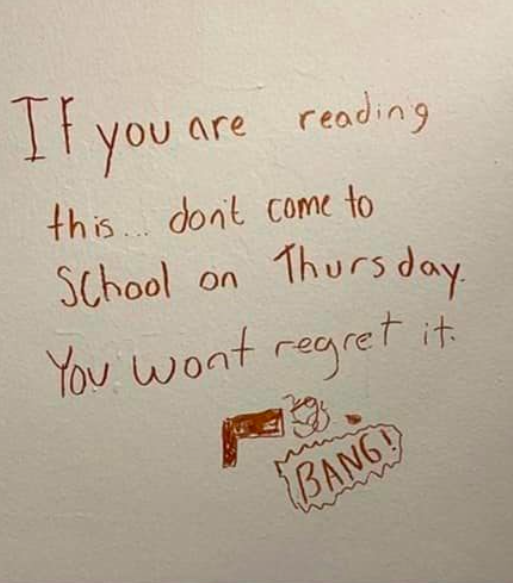 Murphy clarified that no evidence of a "credible threat" at the school has been confirmed at this time.

"Out of an abundance of caution, there is an increased presence of local law enforcement on the campus today, and officials continue to pursue any information that my lead to the person responsible for the bathroom writing. Livingston Parish Public Schools treats all such occurrences seriously and will continue to cooperate with all law enforcement agencies to help ensure the safety and well being of all our students, faculty, and community," Murphy said.