Weed allergies may be bothering some.

Today and Tonight: Weed allergens were high on Tuesday and are at a moderate level today. Ragweed, Sedge Family, Cocklebur, and Aster are all present. Weather conditions today will be similar to yesterday with temperatures near 93 degrees. Showers will build along the coast and push inland in the afternoon. Areas closest to the coast and the tidal lakes as well as the west side of the Mississippi river have the best chance to catch a shower. Either way, there will still be plenty of dry time today. Overnight lows will be near 72 degrees.

Up Next: The major rain chances will hold off until Saturday. Temperatures will be near 94 on Thursday and Friday and showers will be isolated to coastal areas. Starting Saturday showers and storms will be more widespread. This rainy pattern will continue at least through Tuesday with about 50% rain coverage (about half of the viewing area will see rain) expected each day.

TROPICAL UPDATE: Overnight, Rene was downgraded to a tropical depression but is still expected to strengthen into a tropical storm and eventually a category one hurricane. Tropical Storm Paulette is still out in the central Atlantic as well. Neither of these systems is a threat to the Gulf of Mexico. 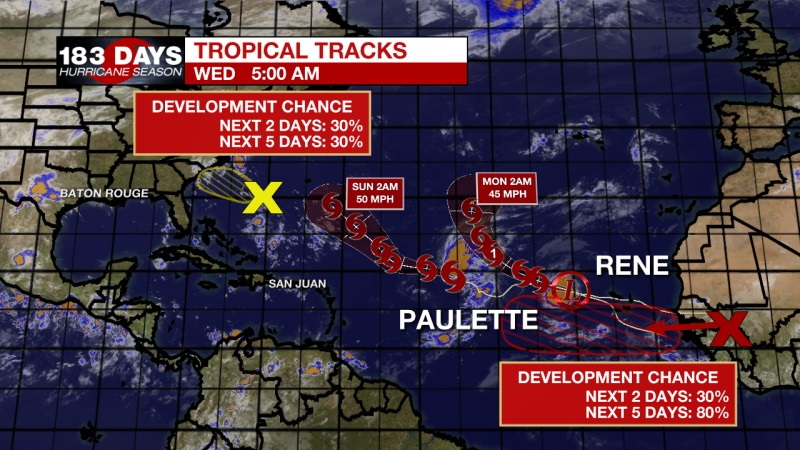 At 500 AM AST (0900 UTC), the center of Tropical Storm Paulette was located near latitude 19.2 North, longitude 45.6 West. Paulette is moving toward the west near 8 mph (13 km/h). A slightly faster motion toward the west-northwest is expected later today, followed by a temporary westward motion on Thursday. A turn back toward the west-northwest is expected on Friday. Maximum sustained winds are near 60 mph (95 km/h) with higher gusts. Little change in strength is forecast today, with gradual weakening anticipated on Thursday and Friday. Tropical-storm-force winds extend outward up to 175 miles (280 km) from the center. The estimated minimum central pressure is 997 mb (29.44 inches).

At 500 AM AST (0900 UTC), the center of Tropical Depression Rene was located near latitude 17.4 North, longitude 30.5 West. The depression is moving toward the west-northwest near 14 mph (22 km/h), and a motion toward west-northwest is expected for the next couple of days, followed by a turn to the northwest. Maximum sustained winds are near 35 mph (55 km/h) with higher gusts. Satellite imagery shows that the system is becoming better organized, and Rene is expected to regain tropical storm strength later today and become a hurricane in a couple of days. The estimated minimum central pressure is 1004 mb (29.65 inches).

A small area of low pressure is located about 400 miles southeast of Cape Hatteras, North Carolina, with minimal shower and thunderstorm activity. Gradual development of the low is possible during the next two or three days, and it could become a tropical depression while it continues to move slowly west-northwestward toward the coasts of South and North Carolina. Interests in those areas should monitor the progress of this disturbance.

A tropical wave is forecast to emerge off the west coast of Africa on Thursday. Gradual development is expected once the system moves over water, and a tropical depression is likely to form late this week or over the weekend while the system moves generally westward across the eastern tropical Atlantic.