The local weather is transitioning from dry to humid. With the increased moisture, showers and thunderstorms will become more numerous as well.

Today and Tonight: Near average high temperatures are expected on Wednesday with thermometers topping out near 84 degrees around midday. Humidity will be more noticeable. With southeast winds of 5-10mph, isolated, afternoon showers and thunderstorms are possible, especially west of I-55. Overnight will be partly cloudy and muggy with lows near 68 degrees.

Up Next: Highs will be in the mid to upper 80s with lows in the upper 60s through the weekend. Daytime warming and availability of Gulf moisture will allow scattered afternoon showers and thunderstorms—especially Thursday through Monday. While severe weather is not expected, recall that warm season thunderstorms can produce downpours, frequent lightning and gusty wind. In addition to this, a stalling area of upper level low pressure could create an even more unsettled round of weather along the central or western Gulf Coast Sunday and Monday. 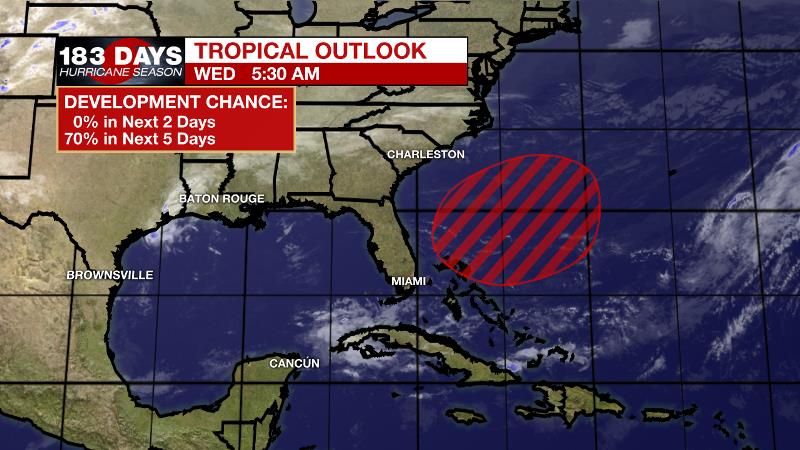 The Tropics: An area of low pressure is expected to develop this weekend northeast of the Bahamas. By that time, the environment is expected to be favorable for some gradual development, and a subtropical depression or storm is likely to form. The system will move northeastward over the western Atlantic from there. Pre-season storms are not that unusual. In fact, the last 5 season have all had a named storm before June 1. If this system gets a name, it will be Arthur.

The Mississippi River: At Baton Rouge, The Mississippi River has fallen into moderate flood stage with a level of 38.8’ as of Wednesday morning. The river is expected to continue falling over the next two weeks. The high water is primarily an issue for river traffic and industry on the west side of the river, although some river island inundation will continue as well. The city of Baton Rouge and the main LSU campus are protected by levees at these levels.

On Wednesday, dew points will return to the 60s and there will be some noticeable humidity in the air. Enough instability will be available west of I-55 that isolated showers may develop during the late morning and afternoon hours. These will primarily be driven inland by the sea breeze. Moving into Thursday, persistent onshore flow and cooler temperatures aloft will lead to the familiar marine breeze and daytime warming cycle of showers and thunderstorms through Sunday. As you know, these thunderstorms are rarely “severe” but can be attention getting with downpours, frequent lightning and gusty wind. A shortwave trough of low pressure will move into the region on Sunday and enhance development of showers and thunderstorms. Forecast models indicate that this trough will stall out and cut off from the jet stream, thereby leaving a cold pool aloft for widespread showers and thunderstorms late in the weekend into early next week. Depending on the position and integrity of this cut off upper level low, some parts of the western or central Gulf Coast may need to be monitored for heavy rainfall.