A cold front will move into the region on Wednesday keeping Hurricane Michael east of the Baton Rouge area. Much cooler, drier air will follow into the weekend. 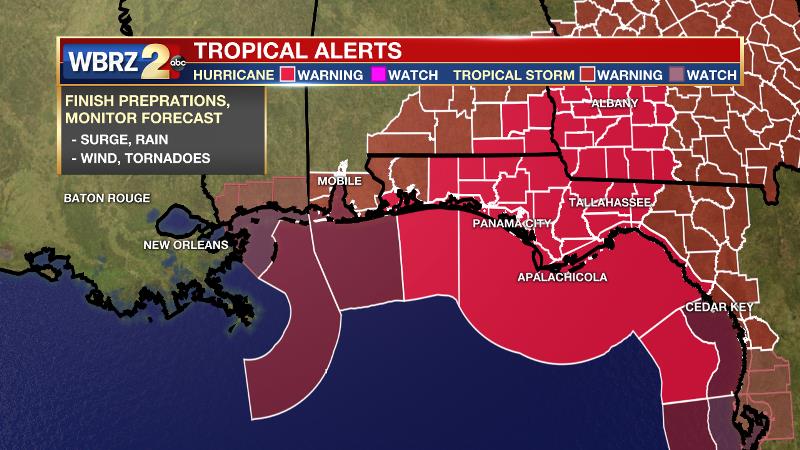 The Tropics: With 140mph maximum sustained winds, Hurricane Michael was moving north at 13mph as of 6am Wednesday morning.  A turn to the northeast is expected just prior to landfall near Panama City, Florida later Wednesday. Michael will then move northeastward across the southeastern United States Wednesday night and Thursday. Hurricane conditions are expected across the Florida Panhandle with warnings from the Alabama/Florida border to the Suwanee River. 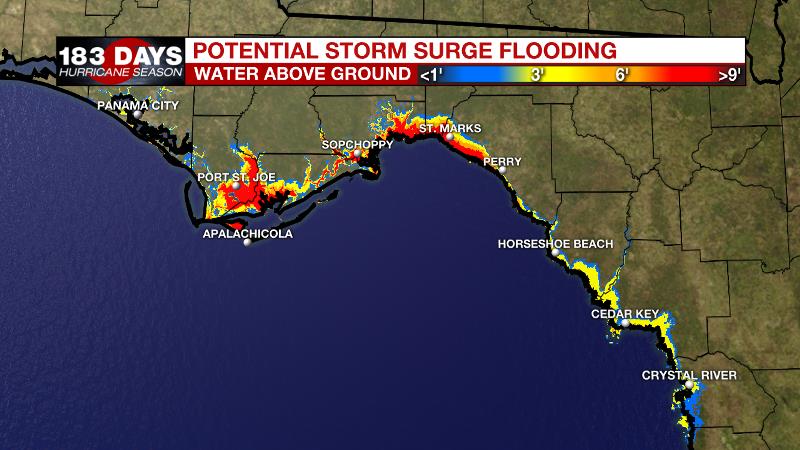 Life-threatening storm surge will be possible in the Big Bend area, from the Walton County line to the Anclote River. 9-13 feet of water inundation is expected on this vulnerable stretch of coastline. Rainfall in excess of 8 inches will create inland flooding issues from Georgia into the Carolinas. On the western side of the system, impact to the WBRZ Weather Forecast area will be minimal. Minor coastal flooding of 1 to 3 feet may occur along the Louisiana Coast and in parts of Livingston and Tangipahoa parishes. A strong east wind will maintain higher than normal water levels along eastern facing shores of Louisiana and Mississippi through Wednesday and so a COASTAL FLOOD ADVISORY has been posted. Hurricane Leslie in the east, central Atlantic Ocean and could approach Portugal as a tropical storm early next week. Tropical Storm Nadine formed in the far eastern Atlantic on Tuesday but is not expected to be a long term threat due to unfavorable upper level conditions. Finally, an area of low pressure is expected to develop in the west, central Caribbean Sea with a 40 percent chance of gradual development over the next 5 days.

Today and Tonight: A cold front will move through the area on Wednesday with isolated showers possible ahead of and along the boundary through mid-afternoon. With highs in the upper 80s, warmth and humidity will continue for one more afternoon before the front ushers in big changes after an overnight wind shift. Expect lows to finally drop into the mid 60s, but they will not stop there! 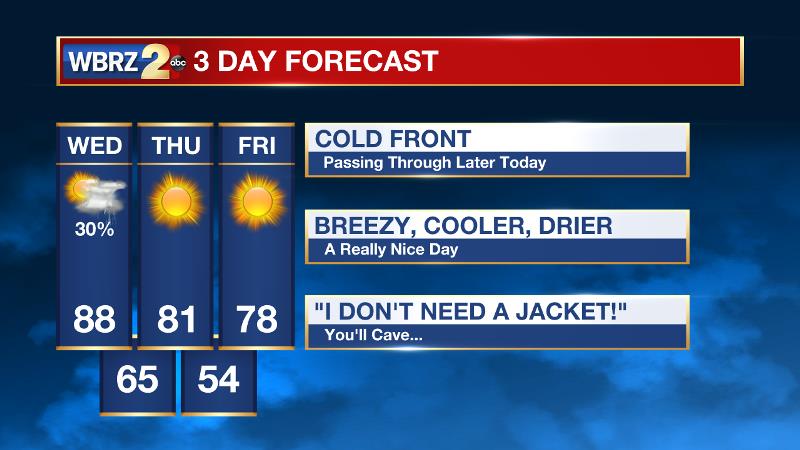 Up Next: The cold front will fully sweep southeastward into the Gulf of Mexico by Thursday morning. Those dew point temperatures, which have been above 70 degrees and kept oppressive humidity around for months, will finally be swept away for a nice drying trend.

Mood set to improve in the #BatonRouge area as a cold front is finally coming to break months of oppressive humidity... #LaWX #MsWX pic.twitter.com/1qyv5H7ADV

Sunshine and cooler temperatures will prevail through Saturday. Friday will likely be the coolest day, starting below 60 degrees, barely returning to 80 degrees followed by another night in the upper 50s. There may be a short stint of warmer temperatures and some humidity on Sunday before another cold front arrives on Monday.

Football Forecasts: Friday night high school games will enjoy the best weather so far this season. Grab a light jacket as temperatures will fall into the 60s by the end of the games. LSU tailgaters and game goers will also enjoy the most pleasant conditions of the season as #2 Georgia comes to Baton Rouge.

Take a light jacket for the morning; you will be able to shed it and will need sunscreen for the afternoon. Southern fans hitting the road will also have similar, nice conditions in Prairie View, Texas.

An upper level trough and approaching cold front will steer Hurricane Michael to the Florida Panhandle on Wednesday afternoon into Thursday morning. The cold front will undercut sinking air on the periphery of Michael and struggle to produce much more than isolated showers on Wednesday afternoon. One more hot and humid day is expected before cold and dry air advection begins behind the boundary on Wednesday night. Expect northwesterly winds to send thermometers into the 60s on Thursday morning and hold afternoon readings into the low 80s despite full sunshine on Thursday. Northerly flow will continue through Saturday allowing dew points to drop into the 50s. The retreat of humidity will allow thermometers to take a big dip at night and Friday and Saturday morning will feature many locations in the 50s. Surface high pressure filling into the Eastern U.S. as Michael departs will result in a day or so of return flow and slightly warmer, more humid conditions on Sunday. However, a deep, longwave trough will eject out of the Western U.S. toward the Great Lakes region dragging another cold front across the local area. While this may bring some unsettled weather on Monday, it will reinforce the cooler and drier conditions through at least the middle of next week.