Cool and quiet weather will persist through the week. Wednesday and Thursday nights will bring the coldest temperatures with some upper 30s and light frost possible.

Today and Tonight: Wednesday will bring temperatures about 10 degrees below average for the time of year with highs struggling for the low 60s. Winds will continue to be northerly at 5-10mph with plenty of sunshine. Nighttime temps will readily drop into the low 40s and upper 30s. Some patchy frost will be possible, but a freeze is not expected so sensitive plants should be fine. Unfortunately, the drier and breezy conditions coupled with the time of year will result in very high pollen counts over the next few days. Juniper, ash and oak are the primary allergens in the Baton Rouge area. 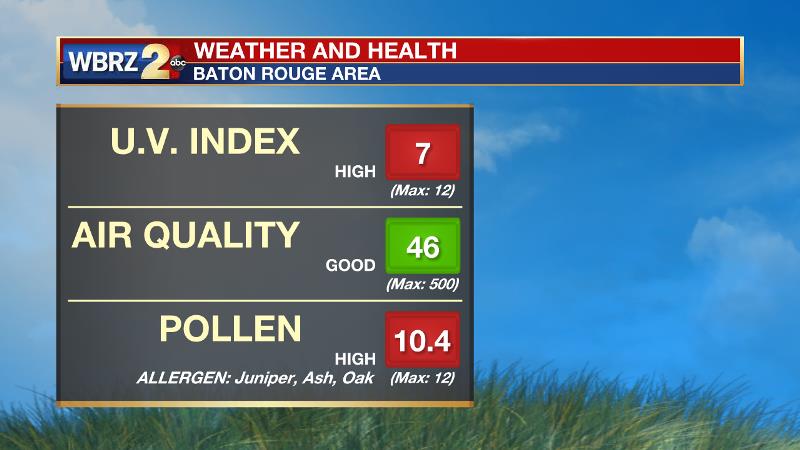 Up Next: Thursday will be another cool afternoon with high temperatures in the low 60s. While low 40s are expected for low temperatures, Friday morning could be another one with some pockets in the upper 30s and light frost. Warmth and moisture will return in advance of the next storm system pegged for the area on Saturday. While alarms are not sounding, the setup is at least worthy of monitoring for some strong thunderstorms. 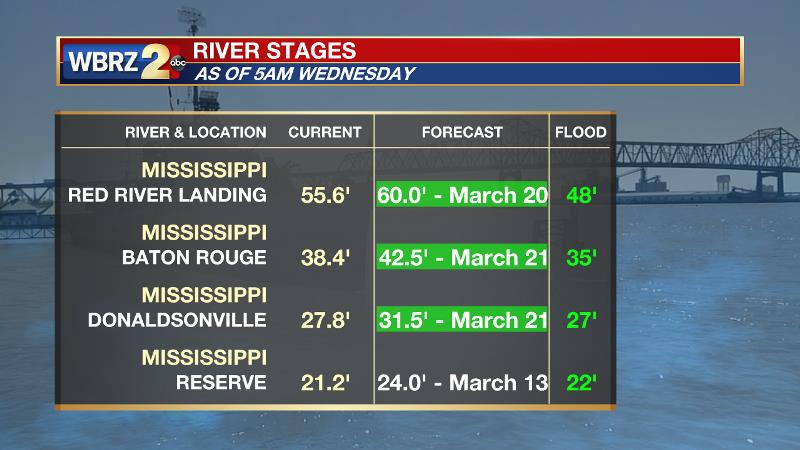 Northerly winds will continue cold air advection over the next 36 to 48 hours. Thanks to an anomalous, deep mid-level trough for early March, below average temperatures are expected for the rest of the week. An area of high pressure at the surface will move from the Mountain West to the Southeast through Friday. By this time, as a trough exits the East Coast, thermometers will begin to moderate somewhat closer to average. After a daytime high in the low 60s and good radiational cooling conditions Wednesday night, low temperatures could dip into the upper 30s into Thursday—especially north of I-12. In outlying locations, some patchy frost will be possible as winds slacken, but freezing temperatures are not anticipated. The next shortwave trough will quickly dig into the nation’s heartland. Strength of the trough is questionable but the tilt looks neutral to positive, which is one limiting factor to storm strength this time of year. Forecast models have backed off the instability pegged for the Saturday/Sunday timeframe, which would also limit storm severity. What actually occurs will most likely depend on if and where a surface low pressure system develops and moves. Typically, a modest surface low moving through central Louisiana creates wind profiles favorable for severe weather. Given the uncertainty, at this time, the forecast will maintain showers and thunderstorms for the middle of the weekend but we will need to continue to monitor for any changes that might signal higher impact weather.