Appropriately so, the Baton Rouge area will wrap up the warmest February on record with well above average temperatures. Another cold front will send seasonable air our way by Friday.

Today and Tonight: Wednesday afternoon highs will get back into the low to mid 80s with humidity too. This will mark the 11th 80 degree day of the month—the second highest number of 80 degree days for a February on record (2017 had 12). Some sun is expected and the breeze will be southerly at 5-10mph. Overnight lows will be in the upper 60s with increasing clouds. 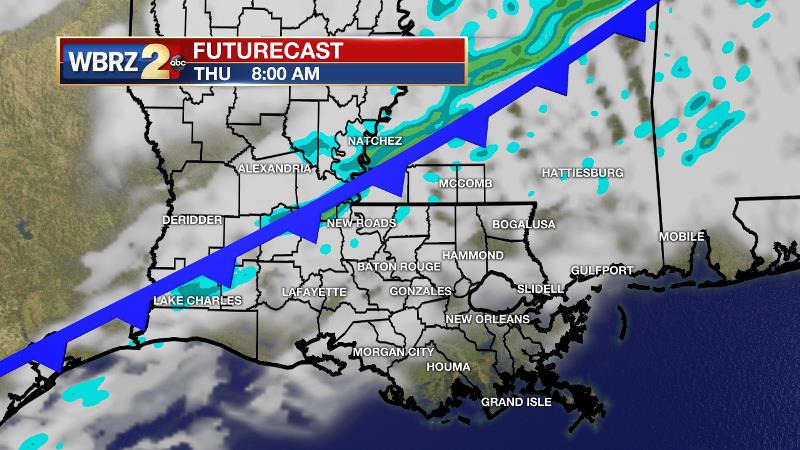 Up Next: A cold front will move into the region on Thursday bringing a line of showers through. On the other side of this boundary, look for the coolest readings thermometers have seen in a few weeks, especially with regard to morning lows. Some 40s are anticipated Friday and Saturday mornings. Afternoon highs will be close to normal in the low 70s with sunny afternoons. At least two nice outdoor days are anticipated before unsettled weather returns late Sunday into next week. 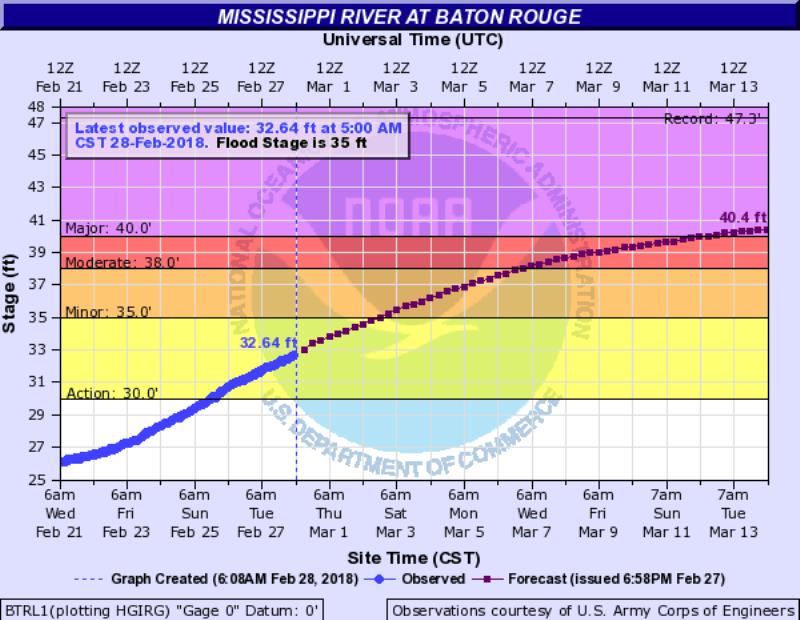 The Mississippi River at Baton Rouge is slowly rising in response to heavy rain in the Midwest and Ohio Valley over the last few weeks. At Baton Rouge, a crest 5 to 6 feet above flood stage is expected in the next two weeks. Given the current forecast, river traffic and industrial operations would be affected; however, the city of Baton Rouge is protected by the levees. River islands and some inland areas north of the city, such as farmland near Angola, will experience some inundation.

A ridge in the Gulf of Mexico will briefly nudge northward across the central Gulf Coast allowing for well above average temperatures on Wednesday. As the mid-levels are not expected to be saturated, some sunshine will also boost temperatures. This ridge should keep rain at bay on Wednesday and send thermometers into the low 80s. The warmer readings will not last long because a stronger shortwave trough will drive a cold front into the area on Thursday. A line of showers and thunderstorms will accompany the front into north Louisiana and Mississippi but the associated shortwave trough is expected to begin shearing out as the basin positons north of our area. In addition, the cold front will move beneath the upper ridge to our south and should slow and weaken as it approaches the Gulf of Mexico. For this reason, thunderstorms and widespread, heavy rain look unlikely. While it previously appeared the action would come quickly on Thursday, the southward progression of the boundary and the precipitation may be rather slow, taking most of the day to pass. On the other side of this front, the Baton Rouge area is likely to enjoy a stretch of sunshine and more seasonable temperatures. By this weekend, lows could dip all the way into the 40s, marking the coolest temperatures since mid-February. Another ridge will briefly build over the area on Saturday afternoon allowing warmer than average readings. Yet again, a retreating front will come north on Monday returning showers and thunderstorms to the forecast. A cold front to follow on Tuesday could bring some rounds of moderate to heavy rain.