Since September 10, only one day (September 19) has recorded a trace of measurable rain at Metro Airport in Baton Rouge. Dry conditions will continue into the middle of October.

Next 24 Hours: Expect clear skies overnight with low temperatures bottoming out in the low 60s. Thursday will be a little warmer yet with several locations notching high temperatures in the upper 80s. There will be plenty of sunshine and a light northeast breeze.

Up Next: On Friday, lows will be in the mid 60s and highs will be in the upper 80s. One or two spots could hit 90 degrees. A cold front will sag south through the area on Saturday morning. That system is likely to pass without rain; and it will be followed by a sunny and mild afternoon. LSU Football fans can expect clear and quiet weather for tailgating. For the 11am game, temperatures will begin in the mid 70s and warm into the mid 80s. Southern fans will feel warmer temperatures over in Prairie View, Texas. Afternoon temperatures will top out in the 90s and remain there through the 4pm kickoff. Overnight temperatures will return to the 50s Saturday and Sunday night. There next chance for showers appears to be in sight toward the middle and end of next week. CLICK HERE for your detailed 7-Day Forecast.

The Tropics: Tropical Depression Twelve is barely organized. As of 4pm Wednesday, the system was moving northwest at 10mph with 35mph winds over the eastern Atlantic. It will dissipate on Thursday. 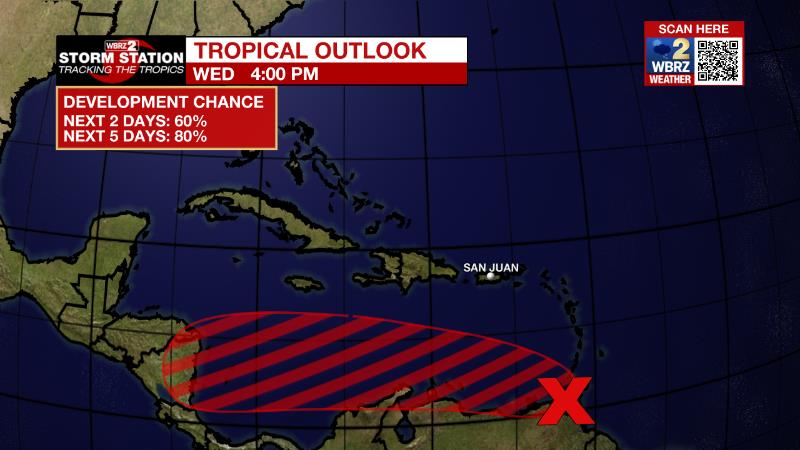 Surface observations and data from an Air Force Reserve reconnaissance aircraft mission this morning indicate that the broad area of low pressure located over the far southeastern Caribbean Sea does not have a well-defined center. Although the system is producing a large area of showers and thunderstorms over the southern Windward Islands and adjacent waters, satellite and radar imagery from Barbados show that it is not well organized. The system is forecast to move generally westward near the northern coast of South America, and interaction with land is likely to hinder significant development during the next day or so. After that time, environmental conditions are expected to become more conducive for development, and there is an eighty percent chance that a tropical depression forms within the next two to three days when the system is over the south-central Caribbean Sea.

The Explanation: A surface high pressure system across the Great Lakes will continue to slide southward over the Mid South into Thursday and likely settle just north of our region by Friday. Aloft, the wind flow will become zonal (west to east) through the rest of the forecast period, basically bringing much of the same weather as we've been seeing for the last few weeks. Temperatures will continue warm a degree or two each day as the upper levels also warm thanks to a ridge nudging westward from the western Atlantic into the central Gulf of Mexico. Finally, by Friday night, a weak cold front is forecast to move toward our region. Without a high quality moisture return and the weak nature of the system, rainfall is not anticipated. With that dry frontal passage on Saturday, temperatures will trend down just a bit. The GFS model is a tad more aggressive with this front compared to the ECMWF, and puts high temperatures in the low to mid 80s and low temperatures in the mid to upper 50s for this weekend and early next week. By the middle of next week, a more robust upper level trough of low pressure could finally bring a chance of some rain to the area.