The National Weather Service has issued a *HEAT ADVISORY* for the entire WBRZ Weather Forecast Area through the end of the week. With even higher air temperatures and steadily oppressive humidity expected over the weekend, the bulletins will likely be continued. As a reminder, stay hydrated and try to not over exert during the middle of the day to avoid heat illness.

Next 24 Hours: The remnants over any showers will decay by midnight. Even giving way to a mostly clear sky, thermometers will not drop much lower than 76 degrees, save for a few spots that pick up some rain after dusk. Thursday will remain hot and humid with partly sunny skies sending high temperatures into the low 90s and feels-like temperatures into the low 100s. An isolated shower or thunderstorm is possible during the mid to late afternoon hours.

Up Next: Little change is expected to end the week, in fact, with even lower chances for showers and thunderstorms, thermometers should trend hotter. Over the weekend, an upper level ridge will build a dome of warm, slightly drier air over the region. While this happens in the upper levels of the atmosphere, the effects do translate down to the surface. Air temperatures will surge into the middle 90s Friday through Sunday. With dew point temperatures staying in the middle 70s, feels-like temperatures will be well into the low 100s. These unpleasant to dangerous conditions will last for many hours because the slightly drier atmosphere will make it tough for any organized showers and thunderstorms. Rain coverage within the 13 Parish, 3 County Forecast Area will stay between 10 and 20 percent. A weak front is expected to move into the area early next week resulting in an uptick of showers and thunderstorms and some slightly cooler temperatures. CLICK HERE for your full 7-Day Forecast.

The Explanation: The axis of an upper level ridge of high pressure will build over the area from the Midwest. On the southern edge of this ridge, a weak inverted trough may ride over the Gulf of Mexico late Thursday to provide a slight enhancement in showers and thunderstorms. Friday through Sunday, atmospheric moisture is expected to be at or even below average for the time of year while the upper level ridge expands over the Gulf Coast. Not only will the associated sinking air push rain coverage back down to very isolated but it will also raise temperatures. The best chances for cooling showers will likely be on the southeastern perimeter of the upper level ridge near the coast and east of I-55. The weekend could feature highs that easily achieve the mid 90s, or higher. Ample humidity will maintain feels-like temperatures in the 105 – 110 degrees range for several hours each day. 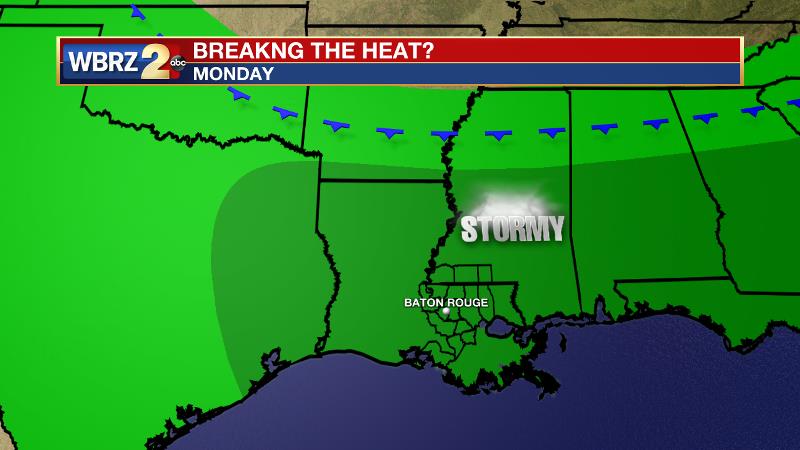 Another pattern switch is on tap for next week. An unseasonably deep upper level trough will dig into the Eastern U.S. on Monday and Tuesday sending a cold front into the Southeast. These features will combine for a few days with more widespread, possibly heavier showers and thunderstorms. However, if the front can actually pass through the area, which is possible though unlikely, we could feel a nice dip in humidity for the middle for next week.