The Baton Rouge area is set to string together several days of high temperatures in the 80s. As a reminder, Daylight Saving Time will begin this weekend as clocks go ahead one hour. The sun will set at 7:12pm Sunday.

Next 24 Hours: Beneath partly cloudy skies, expect an overnight low temperature to stop around 60 degrees. Thursday afternoon will be partly sunny with high temperatures near 80 degrees and southeast winds of 10mph.

Up Next: The workweek will end and the weekend will begin with a persistence forecast. Friday and Saturday are expected to have partly sunny skies, starting temperatures in the low 60s and afternoon readings hitting the low 80s. Either day, a stray, light shower is possible but the majority of locations will be rain free through this time. A better shot at showers and thunderstorms will come on Sunday. A storm system in the Lower Midwest will send a weakening line of showers and thunderstorms into southeast Louisiana and southwest Mississippi. At this time, the threat for severe weather is very low locally, and it is possible the precipitation is falling apart as it moves into the local area creating only scattered coverage. That storm system will be slow moving and struggle to get into the Gulf South but could continue some rain chances into next week. CLICK HERE for your full 7-Day Forecast.

The Explanation: With little change to winds on Thursday and a strengthening upper level ridge, expect a continuation of the warming trend with lows in the 60s and highs in the 80s. The onshore flow, or advance of low level moisture, may be just enough to spark an isolated, light shower with the instability caused by daytime warming. However, the ridge over the Gulf of Mexico will keep any organized precipitation well away from the area through Saturday. By the end of next weekend, a deep shortwave trough will be cutting across the southern third of the country. As this trough approach the Mid-Mississippi River Valley, it is expected to take on a negative tilt, which is a more favorable orientation for stronger thunderstorms. 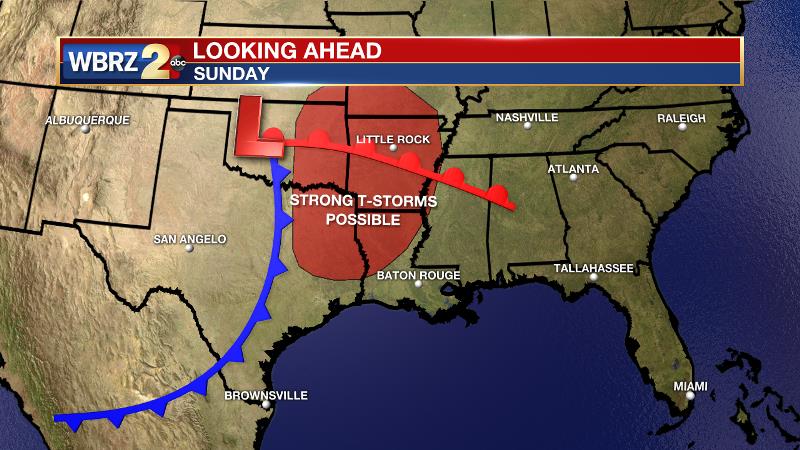 The Storm Prediction Center has already outlined areas of northwestern Louisiana, Arkansas, Oklahoma and Texas with an outlook for severe weather but the ingredients look meager locally. Should the system track a little farther south, it could be something to watch in the Baton Rouge area as well. The associated front will chug into the region and potentially stall over the Gulf Coast early next week bringing a continued chance for showers and thunderstorms Monday through Wednesday.