Although the weather will turn cool and stay unpleasant, there is some clarity on the forecast through this weekend. Another challenge and threat from winter arises early next week.

The Next 24 Hours: More clouds and areas of fog are expected on a mild night that will stay in the 60s. Expect showers and thunderstorms to develop—especially after midnight. Thursday will be unsettled. Rain and thunderstorms will be possible through the day with some downpours possible at time. A few areas could see street and poor drainage flooding. While temperatures could level in the mid to upper 60s early, they will fall into the 50s before dusk.

After That: Starting off much cooler and in the 40s, periods of rain will continue on Friday with little warming. A stalled front in the northern Gulf of Mexico will hold lingering clouds and a few showers in place through Saturday. It is possible that thermometers will stay in the 40s from Friday morning through Saturday afternoon. Valentine’s Day will start just above freezing but finally have a chance to dry some. However, clouds are likely to hang around. The next forecast challenge comes early next week. A strong storm system moving across the southern United States will spread precipitation across the Gulf Coast on Monday afternoon. While this will begin as rain, cold air rushing in behind it could support a period of frozen precipitation Monday night. Even if not, temperatures are expected to fall into the mid 20s Tuesday morning and that could cause any leftover wet spots to turn icy.  CLICK HERE to view your complete 7-Day Forecast. 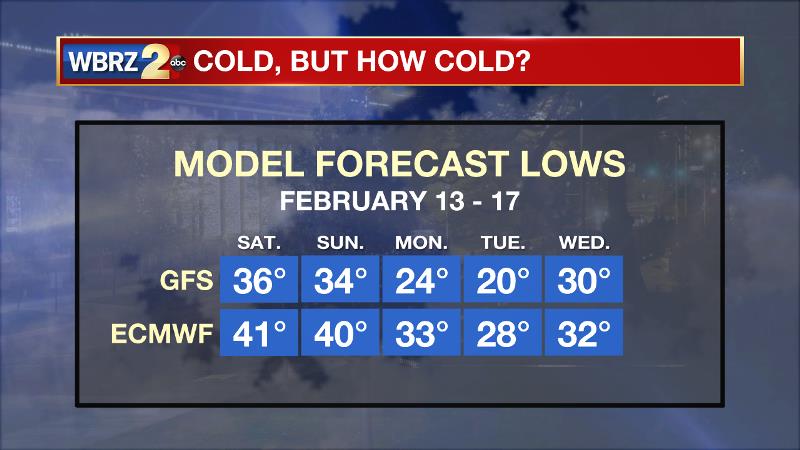 The Explanation: A slow-moving cold front will arrive with rain and maybe even thunderstorms on Thursday. Instability will be rather limited so the threat for severe weather is low. However, a day of rain with a few downpours could lead to some minor surface flooding. The cold front will push through on Thursday night before stalling in the northern Gulf of Mexico. While low level winds turn north to bring in much cooler temperatures, upper level winds will stay out of the southwest. This will cause moisture to be forced over the cold front leading to a prolonged period of clouds, light rain and chilly temperatures. The front will finally escape far enough south for some dry time on Sunday, but mostly cloudy skies are held in the forecast due to lingering mid to upper level moisture. One positive of the clouds—the lack of maximized radiational cooling overnight will likely keep lows at or just above freezing Friday, Saturday and Sunday night. A strong upper level trough will move across the Four Corners region on Sunday and eject southeastward into the western Gulf of Mexico by Monday. This storm system will send a broad swath of precipitation across the Mid-South with heavy snow likely in a corridor between Dallas, Texas and Little Rock, Arkansas. 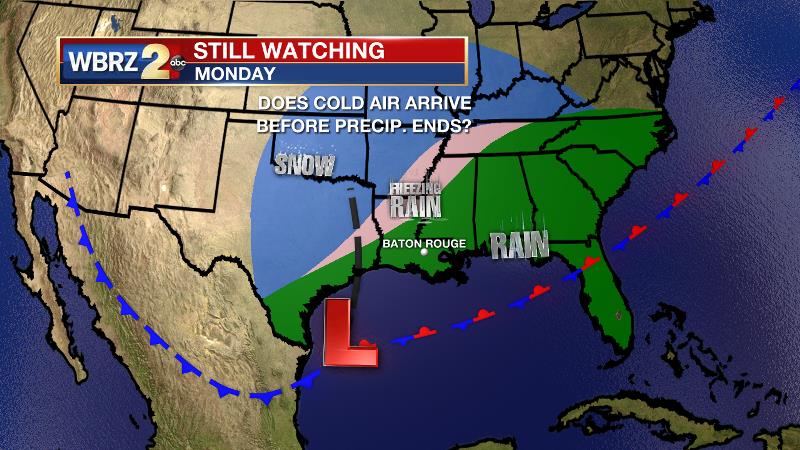 Farther south and into the local area, temperatures are expected to be well above freezing Monday afternoon causing another round of chilly rain. The biggest challenge is timing the arrival of very cold air that is expected to dip in behind this system. Should the low levels cool fast enough on Monday evening, there could be a window for precipitation to end as a wintry mix. Even if the cold air lags just behind the precipitation and no mix or change happens, temperatures could fall into the mid 20s fast enough for leftover wet spots to flash freeze and cause patches of ice. This, of course, would be an impactful issue for the local area so continue to check in with the forecast and expect changes and updates over the coming days.