Sunny, warm, and a little muggy for your Tuesday. Rain chances will go up later this week.

Today and Tonight: The Baton Rouge area is under a dense fog advisory until 10 am, so please use caution just in case you run into one of the thick spots. When the sun comes up, any fog will lift, and temperatures will heat into the mid-80s. This afternoon will feel very similar to yesterday.

Up next: The forecast for the first half of the week shows temperatures in the mid-80s, humid conditions, and a small chance for a stray shower or two. Tuesday and Wednesday will be the best days to be outside without the threat of rain. Then, after a few days of pumping moisture into the area, rain chances will go up on Thursday and Friday (near 30-40%). Neither day is expected to be a total washout, but everyone from Mississippi down to the coast could see some rain. There are no major cold fronts in the 7-day forecast, but we will be tracking one next week. Until then, highs in the 80s, lows in the 60s, and the humidity is here to stay. Click here to see the 7-day forecast.

Tropical Storm Epsilon continues to move out in the open Atlantic. It will not impact the Gulf Coast or anywhere in the United States. There is another area to watch in the Caribbean Sea with a very low chance of tropical development. 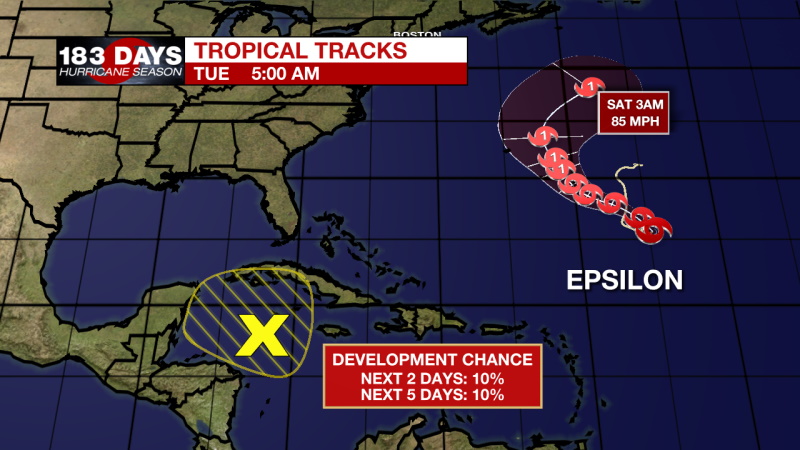 At 500 AM AST (0900 UTC), the center of Tropical Storm Epsilon was located near latitude 25.6 North, longitude 54.7 West. Epsilon is moving toward the east-northeast near 3 mph (6 km/h). A turn toward the north and northwest is expected later today, with a general northwestward motion expected through Thursday. On the forecast track, Epsilon is forecast to approach Bermuda on Thursday. Maximum sustained winds are near 45 mph (75 km/h) with higher gusts. Gradual strengthening is expected during the next couple of days, and Epsilon is forecast to be at or near hurricane strength by Wednesday night or Thursday morning. Tropical-storm-force winds extend outward up to 275 miles (445 km) from the center. The estimated minimum central pressure is 998 mb (29.47 inches).

A trough of low pressure extends southeastward from the southeastern Gulf of Mexico across the northwestern Caribbean Sea to a broad low-pressure system located over the southwestern Caribbean Sea. This system is currently accompanied by disorganized shower and thunderstorm activity. The disturbance is expected to consolidate over the northwestern Caribbean Sea during the next day or so before moving slowly westward toward the Yucatan peninsula by Wednesday. Regardless of development, the system could bring locally heavy rainfall to portions of central and western Cuba, Jamaica, the Cayman Islands, and the Yucatan peninsula through midweek.