Slightly above average highs will continue through Tuesday. An upper level storm system will draw some tropical moisture into the region for better chances at showers and thunderstorms with some downpours possible to end the week.

Today and Tonight: Mostly to partly sunny skies are anticipated with slim precipitation chances. It will be hot with a high temperature near 95 and enough humidity around for a feels-like temperature to make it over 100 in the afternoon. Overnight will be partly cloudy with a low near 74. 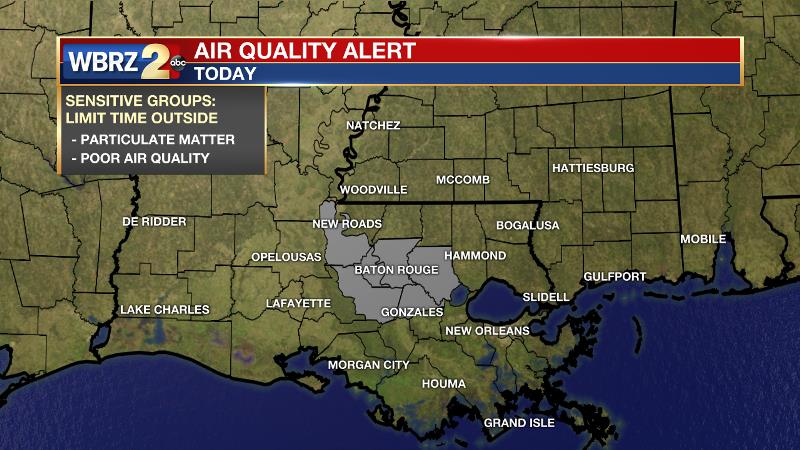 An *AIR QUALITY ALERT* has been issued for the Baton Rouge area for Tuesday.  Light morning winds will reduce pollutant dispersion, and continued warm temperatures and sunny skies will enhance ozone formation. Therefore, despite southerly afternoon winds increasing mixing and dispersion, air quality levels will be Unhealthy for Sensitive Groups in the Baton Rouge area. You can help mitigate this issue and reduce emissions by driving less and refueling very early or very late in the day.

Up Next: By Wednesday, a trough developing over Texas will help to bring better chances for rain and thunderstorms. This system will tap into some moisture from a tropical disturbance in the southwestern Gulf and the result will be scattered to widespread activity with healthy rain coverage of 50 to 70 percent each day mid-week through early weekend. General rain amounts of 1-3 inches can be expected with isolated higher amounts where storm downpours occur. As is usual in the summer season, this can lead to some street and poor drainage flooding. Larger issues may arise over the Atchafalaya Basin where standing water remains and not much rain can be tolerated. With the unsettled weather, highs will be limited to the upper 80s while lows stay in the mid 70s. The pattern should dry out a bit this weekend. 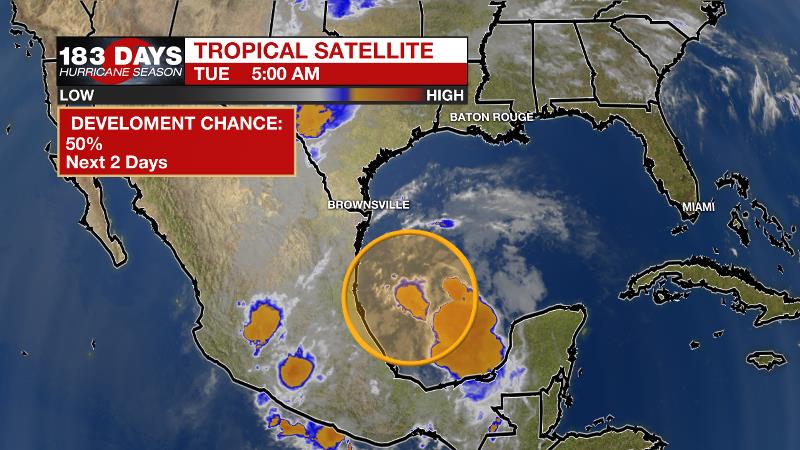 The Tropics: Showers and thunderstorms associated with a broad area of low pressure located over southwestern Gulf of Mexico are currently disorganized.  This system is expected to move slowly northwestward toward the coast of Mexico, and it has a 50 percent chance of becoming a tropical cyclone before moving inland later today or tonight. Regardless of development, the disturbance will likely produce heavy rainfall over portions of southeastern Texas and Louisiana through Thursday.

The Mississippi River: At Baton Rouge, major flood stage continues with a level of 43.1’ as of Tuesday morning. Peaking at 44.1’ on March 19, the river set its 7th highest recorded crest at Baton Rouge. At 146 days, this year marks the longest period above flood stage at Baton Rouge. With continued heavy rain events in the Midwest, runoff will result in a second, higher crest in early June. The current forecast is for the level to reach 44.5’, which would be one of the top five highest crests on record. The Morganza Spillway will be opened to mitigate flood risk downstream into the Baton Rouge area. This will increase water levels over unprotected areas over the Atchafalaya Basin. If you have property or interests in the floodway, for specific inundation levels, you are encouraged to visit this link. On the Mississippi River, the high water will remain an issue for river traffic and river islands, although some inundation will continue for unprotected low-lying areas. The city of Baton Rouge and the main LSU campus are protected by levees up to 47 feet. Some soggy areas and seepage may be noted due to the long duration of high water placing pressure on the levees. As some of the Mississippi River diverts into the Atchafalaya River, gauges at Krotz Springs and Morgan City will stay high as well. This creates backwater flooding in parts of Assumption Parish in areas such as Bayou Chene, Stephensville and around Lake Palourde.

An upper level ridge remains positioned over the central Gulf Coast keeping the atmosphere warm and stable while northeast winds hold slightly drier air. The result has been mostly sunny skies and hot temperatures. This setup will prevent organized precipitation development through Tuesday. An upper level trough will move across Texas and Louisiana from the middle of the week through the early part of the weekend. In replacing the ridge, this feature will allow enough instability for showers and thunderstorms to develop. Aiding this system will be a plume of moisture streaming in from the Gulf of Mexico. Expect scattered to possibly widespread coverage in rain and thunderstorms, especially Wednesday through Friday. The tropical moisture will allow rainfall rates of 1-3" per hour. 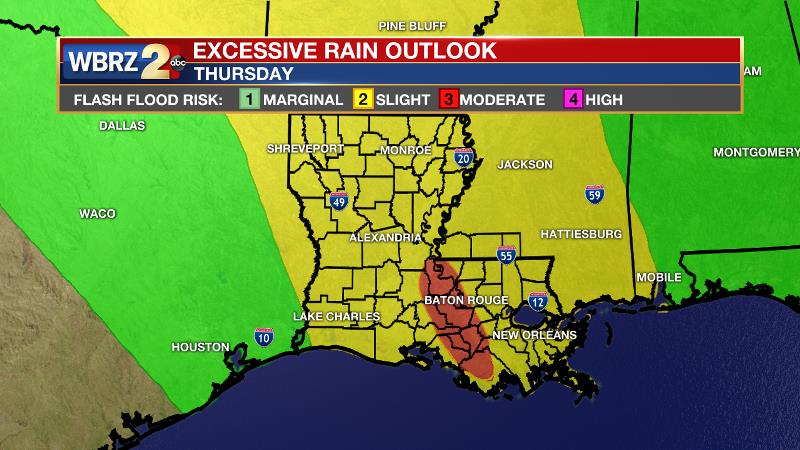 Therefore, the Weather Prediction Center has placed the area in a 2/4 “slight risk” for excessive rainfall on Thursday. For those areas dealing with backwater flooding over the Atchafalaya Basin, not much is needed for flash flooding so there is a 3/4 “moderate risk” for  excessive rainfall Thursday. Overall, we can expect 1-3 inches of rainfall through this stretch with higher amounts where storm downpours occur. Keep in mind, while that seems high in the cool season, about 1 inch is needed per week to keep lawns and gardens healthy in the summer heat.