Some light snow occurred in southwest Mississippi and neighboring parts of Louisiana for 45 to 60 minutes on Tuesday morning. Some viewer photos indicate only a coating of snow in some of those locations. Stiff, north winds will result in feels-like temperatures or wind chills in the 20s and 30s through the day, so dress accordingly.

Today and Tonight: Through Tuesday afternoon sun will allow high temperatures in the upper 30s and low 40s. This, in addition to northwest winds of 10-15mph will be very important in drying out any leftover moisture on the ground and preventing icy spots as lows plummet into the mid and upper 20s by Wednesday morning. A pocket of clouds advancing through the area may actually prevent a hard freeze in most neighborhoods. However, since this is the coldest air mass so far this winter, it would be advisable to wrap exposed outdoor pipes, faucets and hoses north of I-12.

Up Next: Sun will help thermometers back to about 50 degrees on Wednesday, with more significant thermal moderation anticipated for the end of the week. Highs will be above average by Friday. Unfortunately, clouds will also be increasing. An upper level disturbance will lead to showers across the area—most likely on Saturday. This storm system will not be accompanied by more cold air and temperatures will stay above average into early next week.

A strong cold front has pushed through the WBRZ Weather forecast area. Dry air will cut off precipitation from northwest to southeast shortly after dawn on Tuesday. The thermal trough will scoot east just as quick allowing some sunshine to return. This will work against the northwest winds of 10-15mph to actually allow just a bit of warming back into the 40s on Tuesday afternoon. These two factors are very important in that sufficient drying of lingering moisture is expected so that no icy surfaces are expected as the heart of the cold air mass envelops the area Tuesday night. The winds however, will create unusually low wind chills for this region and much of the day will feel like it is in the 20s or 30s. The coldest temperatures so far this season are expected and a hard freeze is possible north of I-12 with lows possibly dipping to 25 degrees for a few hours. 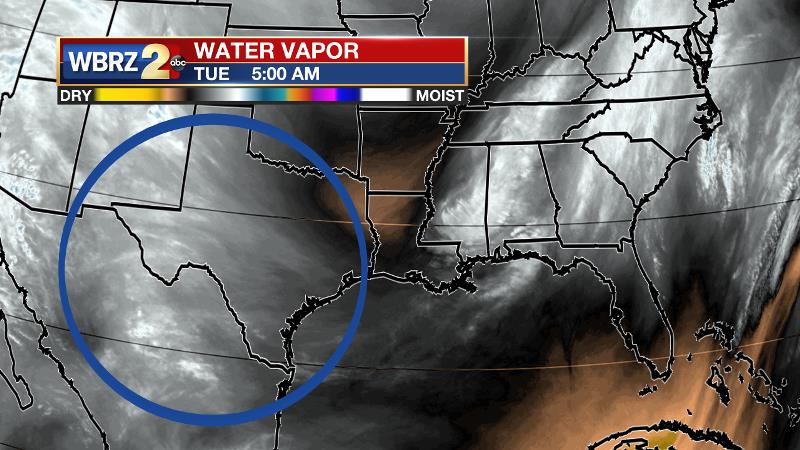 However, this potential is diminishing due to a weak upper level disturbance spreading some cloud cover across the forecast area. Any clouds act as an insulator that tends to hold temperatures up a few degrees. As a surface high pressure moves over the area Wednesday afternoon and then shifts eastward, temperatures will moderate through the week. Near normal readings are expected by Friday. The upper level flow will become more east/west, or zonal, over the weekend leading to several weak disturbances riding through the region. These disturbances will be difficult to time until they get closer but each will come with an uptick in cloud cover and nominal rain chances. Continued temperature moderation with no major dips in the jet stream will bring highs into the 70s for several days next week.