Through the middle of the week, expect quiet weather with chilly morning and comfortable afternoons. Highs in the 80s and a few showers will be possible as we approach the upcoming weekend.

Today and Tonight: Sun and high clouds are expected for Tuesday. With a continued north breeze, high temperatures should not exceed the mid 60s. Overnight will be mostly clear with low temperatures around 40. Typical cool spots could find patchy frost with lows in the upper 30s. 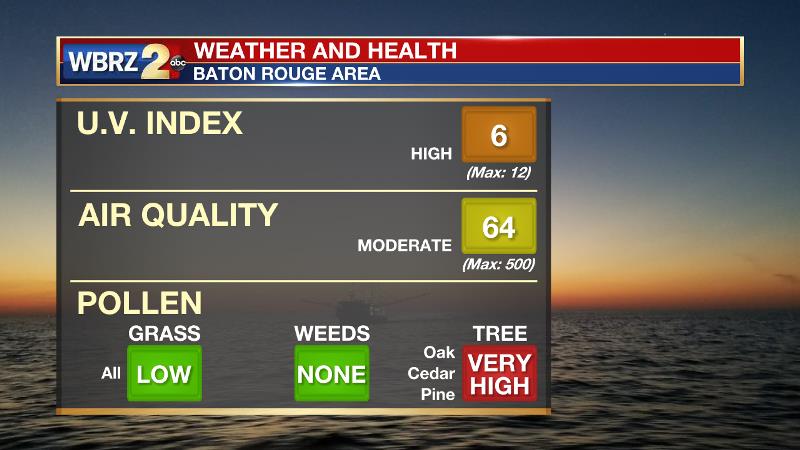 The latest count report shows tree pollen to be very high. Particularly if you are allergic to oak, cedar or pine, you may want to take precautions.

Up Next: Over the next two days, chilly mornings will give way to mostly sunny and seasonable afternoons. Thursday will be a little warmer than Wednesday. Change is expected by Friday with moderating temperatures. The warmer readings will likely be accompanied by increasing cloud over though and possibly some showers. Unfortunately, forecast guidance is not yet in good agreement with regard to precipitation, so only a chance of showers will be mentioned in the weekend forecast. There is better agreement that warmer temperatures will prevail with highs in the 80s on Saturday and Sunday. 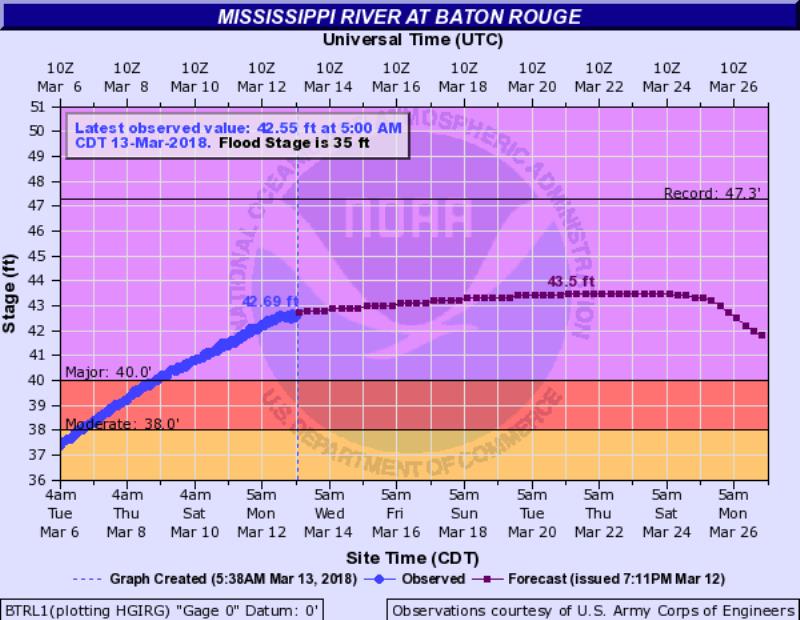 The Mississippi River is expected to crest within the next week, around March 20. Given the current forecast, impact outside of the levees is expected to be minimal with the exception of soppy land around the Angola farms and by the LSU veterinary complex. River island inundation will continue as well. The prolonged period with water running high could result in additional seepage and boils around the levees as well. On the river, traffic and industrial operations will be restricted. Levees protect highly populated areas around the river, including Baton Rouge.

Surface high pressure will slowly migrate from the Upper Midwest to the Gulf Coast through Thursday resulting in quiet weather for the local area. Above this, 500mb charts are showing a few areas of positive vorticity advection moving across the region, particularly on Tuesday afternoon and evening. Already seen on water vapor imagery, this should result in some cirrus clouds moving over the area. Forecast models did not perform very well last week and that may continue to be an issue this week, especially with regard to low temperatures. Thanks to very dry air, lows should be able to achieve the upper 30s and low 40s each morning through Thursday. No freezing temperatures are expected but typical cold spots north of I-12 could see some light frost. As you would expect in the transitional seasons, models struggle with the medium range forecast. While it looks as though as trough will form in the Western U.S., the question lies in when this trough will eject eastward and return unsettled weather to the central Gulf Coast. The ECMWF model breaks the trough free earlier and therefore paints a wetter picture for Friday through Sunday. The GFS model keeps a ridge over the region through Sunday, which would suggest almost entirely dry conditions, but surface QPF output is still there. With the GEM model also putting some showers in the region, we will continue to highlight a possibility of showers at this point, but will await some more model continuity as we get closer.