For the third straight day, a record high temperature fell at Baton Rouge Metropolitan Airport. Thermometers reach at least 88 degrees as of 3pm which was enough to beat a 1986 mark of 87.

Next 24 Hours: A bit of drier air filtering into the region will keep skies mostly clear overnight as low temperatures drop into the mid 60s, still well above average for the time of year. Wednesday will be mostly sunny and warm, though not record setting like previous afternoons. Most locations will have high temperatures sneak into the low 80s. 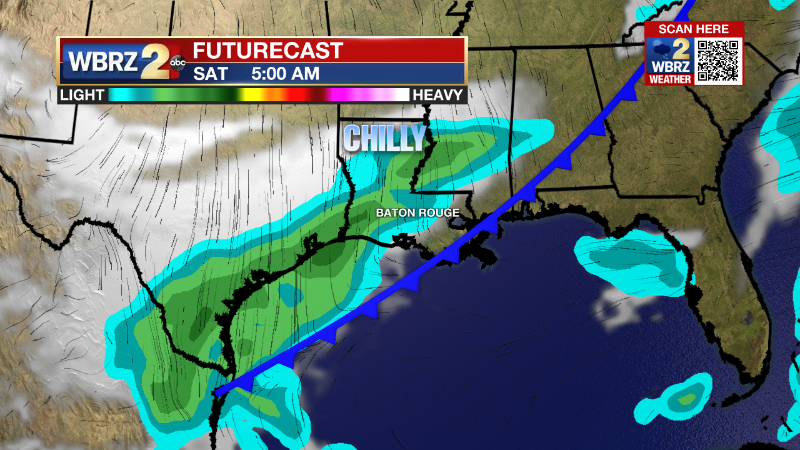 Up Next: The rest of the workweek will be quiet, mostly clear and temperatures will be a little closer to seasonable averages. On Friday, a strong cold front will move into the area. North winds behind it will bring on a substantial temperature drop heading into the weekend as thermometers reach the upper 40s by dawn Saturday. The front itself will be starved of moisture making any rainfall ahead of it, unlikely. However, there are some signs that moisture on the back side could result in some clouds or even a stray shower on Saturday. This weekend, expect high temperatures in the low 60s with low temperatures in the 30s on Sunday morning. CLICK HERE for your detailed 7-Day Forecast. 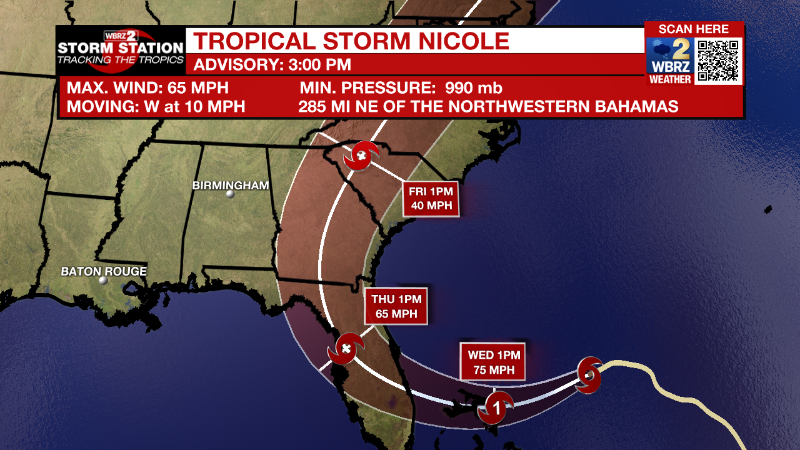 The Tropics: Tropical Storm Nicole continues moving west at 10mph with maximum sustained winds of 65mph. A general westward motion with some jog south or north is expected through Tuesday night before a northwest turn on Wednesday. On this track, Nicole will strengthen into a hurricane and move over The Bahamas Wednesday and into central Florida by Thursday morning. Nicole is a large system with tropical storm force winds extending outward up to 380 miles from the center. In addition to those winds, surge may top 4-6 feet with 3-5 inches of rainfall and isolated tornadoes upon landfall.

Shower activity associated with an area of low pressure located about 875 miles east of Bermuda has become a little better organized today. However, upper-level winds are not conducive for significant additional development, so there is just a thirty percent chance for development before the low merges with a cold front on Wednesday.

The Explanation: After another unseasonably warm day, drier air will begin to spill into the region from the northwest on Tuesday night. That will limit fog development and allow temperatures to drop back several degrees. Still, highs and lows will be above average for the time of year. The second half of the work week will be a transition period as that drier air mass is reinforced by Nicole to our east. As Nicole moves across the Florida peninsula during the second half of the week, a strong upper level trough of low pressure and will be moving toward the Great Lakes region with an associated cold front draped southwestward across the United States. Thanks to that approaching front, Nicole will not have any direct impacts on the local area. On the other side of the front, lows both Saturday night and Sunday night are expected to dip into the 30s along and north of the I-10/12 corridor. Daytime highs are also going to drop well below normal, with current forecast highs for Sunday and Monday only reaching the upper 50s to mid 60s.