While still tricky, the general details for your weekend and Christmas forecast have become a bit clearer. Christmas is NOT expected to bring record warmth for a third straight year. A deep trough will dig into the United States bringing colder than average temperatures to much of the country. 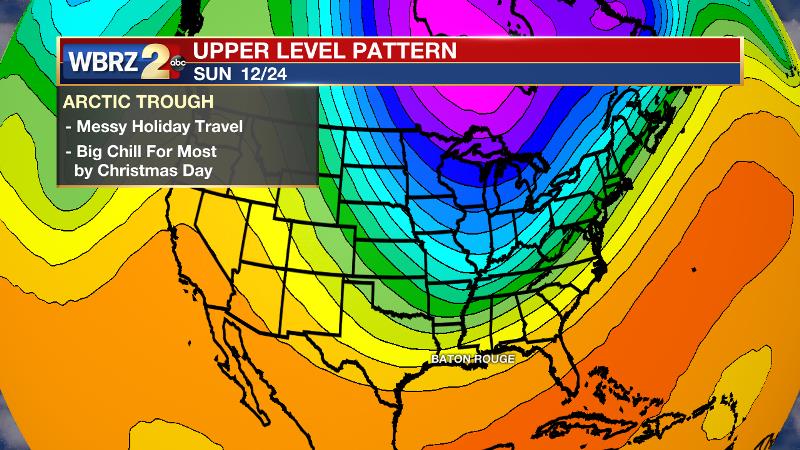 A pair of cold fronts will push into southeast Louisiana and southwest Mississippi over the weekend. Timing on the steadiest periods of rain is still uncertain, although it is reasonable to believe the most widespread activity will come along each boundary. At this point, we will be leaving showers in the forecast from Friday evening into Sunday evening. Guidance is honing in on the bulk of the rain occurring on Saturday. 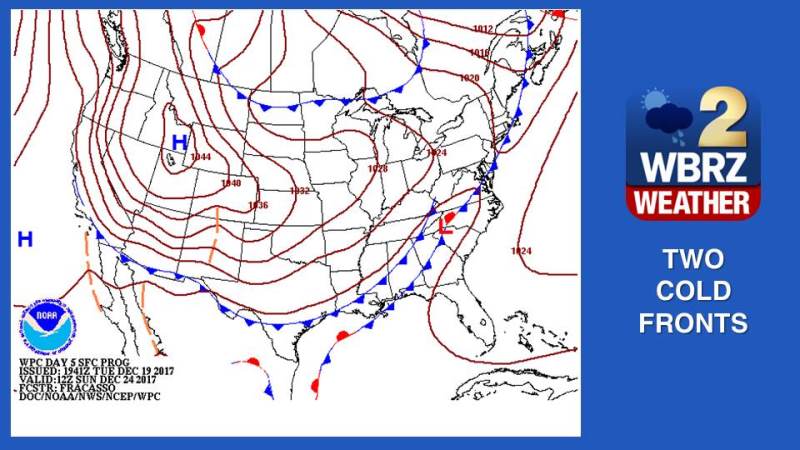 As far as temperatures go, each cold front will bump thermometers down by about ten degrees. The first front will likely pass on Saturday, leaving highs in the 50s and lows in the 40s on Sunday. Another front will pass on Christmas Eve and drop highs to the 40s and lows to the 30s on Christmas Day.

At this point, all major global forecast models remove moisture from the region before any air cold enough to create wintry precipitation would arrive. In fact, the latest information suggests sunny skies for Christmas and the days to follow.

Aside from the Baton Rouge area forecast, these cold fronts will slowly chug across the eastern two thirds of the country and could create some significant holiday travel headaches from Friday through Christmas Eve. Rain could stretch from New England southwestward to the central Gulf Coast, with snow in the major cities around the Great Lakes. The Western U.S. looks quieter.

It appears as though the rogue forecast models, and third party smartphone applications have all backed off any mention of snow that had been displayed over the weekend and into Monday. We cautioned once these model images started to hit the internet that the computers are far too unstable that far out to warrant excitement or alarm.

Why don't "modelogists" show this? Simple: just not as sexy as a 6z op. GFS run displaying snow, yet, 19/21 members of the system show rain/dry. #LaWX #MsWX pic.twitter.com/ohRJpLJzOD

And we don’t say those things to discourage anyone from checking out forecast models or getting excited about wintry weather. We simply want to nip any hype ahead of time. Often, a social media post of “it might snow,” turns into “they said it would snow” and of course the “they” is your friendly neighborhood weathercaster, and when it does not snow, people say “they got it wrong.” We try to be clear that high impact weather events are difficult forecasts even one or two days in advance, let alone seven to ten days in advance. 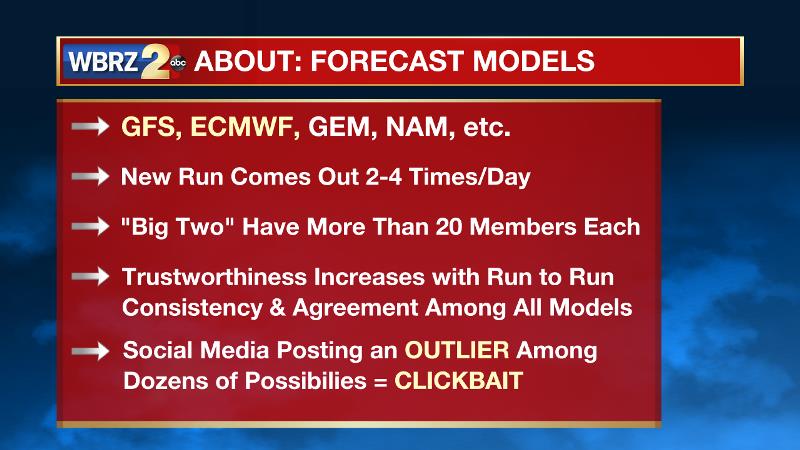 This remains a “work in progress” forecast, which still presents lower than usual confidence. It would not be unheard of for the pattern to do a 180 and change everything, but the information above is what we can see right now.

If you have any questions or comments about this weather blog, you can reach out on Facebook, Twitter or email.