While the primary impacts of Laura have gone, lingering moisture will keep local weather active into the weekend. You will notice the tropical air mass too, feeling a lot of humidity.

JUST IN: the latest advisory on #Laura. For continuing updates as it pulls away from the Gulf Coast, visit our Hurricane Center: https://t.co/D9KBc4cUVj pic.twitter.com/UeJbYwG6eP

The Next 24 Hours: Mostly cloudy skies will persist overnight and the high dew point temperatures (humidity) will result in low temperatures barely exiting the 80s. After midnight, a batch of showers and thunderstorms is expected to develop in south, central Louisiana and possibly move northeast toward Mississippi. Some downpours are possible within these showers. The moist atmosphere will continue to aid the development of scattered to widespread showers and thunderstorms through Friday. This activity should limit high temperatures to the upper 80s.

After That: Over the weekend, showers and thunderstorms should slowly return to the late summer routine of being confined to the afternoon hours and in lesser number. High temperatures may sneak into the low 90s each day followed by continued muggy nights in the upper 70s. A slim shot at rain will be maintained early next week and then there are some signs of drier, hotter days beyond. 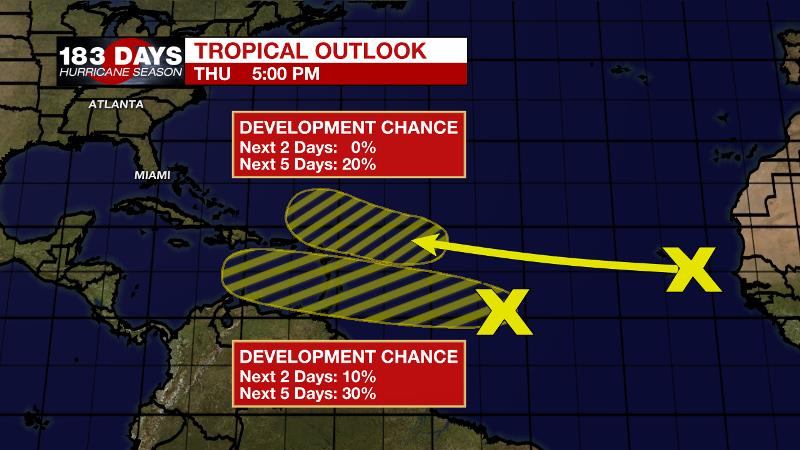 The Tropics: As of Thursday afternoon, Tropical Storm Laura was drenching Arkansas with flooding rain. Maximum sustained winds of 50mph have been quickly diminishing and Laura is expected to become a tropical depression overnight while turning northeast toward the Mid-Atlantic States. Elsewhere, we are reminded that hurricane season is far from being over. A tropical wave over the central Atlantic has a 30 percent chance of development over the next five days as it moves west into the Caribbean Sea. A new wave set to emerge off the African Coast has a 20 percent chance of development once it moves into the central Atlantic next week.

The Explanation: The upper level trough of low pressure associated with Laura will remain draped across the south, central U.S. through Friday. Combined with deep tropical moisture settled over the region, the atmosphere will remain favorable for scattered to widespread showers and thunderstorms. A general weakness of lower pressures and temperatures aloft will allow convection to fire during the weekend afternoons too, though coverage should be lower than Thursday and Friday. Forecast models struggle with how the pattern evolves next week. The ECMWF places a more pronounced ridge in the eastern Gulf thereby favoring drier conditions on Monday and Tuesday. The GFS shows a continued weakness aloft and is therefore wetter. Regardless, both models hint at an upper level trough and perhaps weak front diving in from the northwest by the middle and end of next week. With this, atmospheric moisture would be reduced to below average levels and low to no rain chances would be the result.