Scattered to widespread showers and thunderstorms are expected Friday and Saturday. Thermometers will stay very close to average.

Today and Tonight: If some sun can manage to breakthrough, and this has been a struggle over the last few days, high temperatures will run for the mid 90s. This will likely be the hottest afternoon within the 7-Day Forecast. Just one or two showers are possible in the afternoon hours around the entire area, putting a most likely stamp (though still low chance) on areas north and east of Baton Rouge. Overnight lows will go back into the low 70s.

Up Next: An upper level trough moving from east to west across the Gulf of Mexico will add some more instability to the atmosphere. This will lead to greater coverage in afternoon showers and thunderstorms on Friday and Saturday. Still, daytime heating will be needed to activate rain and storms so the first half of those days will be hot and humid with highs near 90. Morning activities have a lower threat of dodging rain and storms. While a slight tick down in action may come, the overall pattern will not change much through early next week with at least isolated showers and thunderstorms around each afternoon.

The Mississippi River: At Baton Rouge, major flood stage continues with a level of 42.1’ as of Thursday morning. Peaking at 44.1’ on March 19, the river set its 7th highest recorded crest at Baton Rouge. At 173 days, this year marks the longest period above flood stage at Baton Rouge. The level will slowly fall, but is likely to stay above flood stage for several weeks to come. The high water will remain an issue for river traffic and river islands, although some inundation will continue for unprotected low-lying areas. The city of Baton Rouge and the main LSU campus are protected by levees up to 47 feet. Some soggy areas and seepage may be noted due to the long duration of high water placing pressure on the levees. As some of the Mississippi River diverts into the Atchafalaya River, gauges at Krotz Springs and Morgan City will stay high as well. This creates backwater flooding in parts of Assumption Parish in areas such as Bayou Chene, Stephensville and around Lake Palourde.

An upper level ridge should be pretty sturdy through Thursday causing another struggle between daytime heating induced convection and sinking air aloft. For this reason, a mention of isolated showers and thunderstorms will be carried in the forecast. 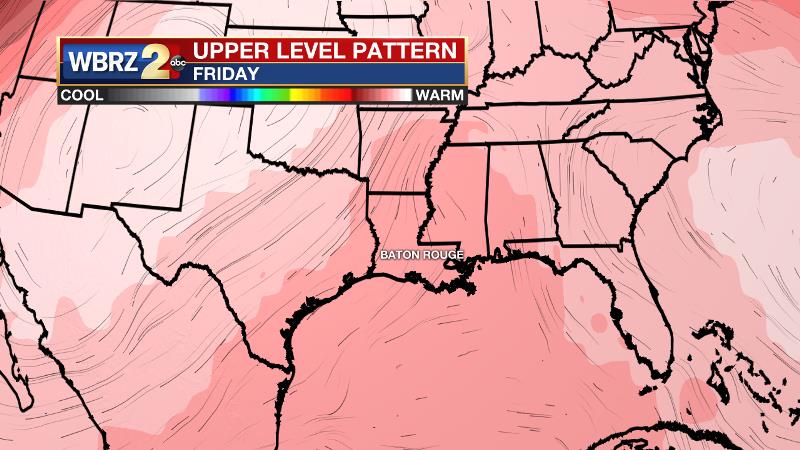 On Friday, an inverted trough is expected to pass from east to west along the Gulf Coast beneath the broad ridge across the south, central United States. The inverted trough will help to spark off scattered to widespread rain and thunderstorms through Saturday. Especially with daytime heating, the afternoons should be the most active periods. This pattern will spill into early next week. The European model shows another ridge building over the eastern Gulf of Mexico by the middle of the week, effectively shunting daytime convection west. However, the American model depicts a weaker ridge that doesn't keep convection down as much. Of late, the American model has been performing a bit better so we’ll leave a chance of showers and thunderstorms in the forecast.