The Capital Area is settling into a very repetitive weather pattern. Heat will be the main weather feature through Memorial Day.

Today and Tonight: Another warm and humid afternoon is ahead with high temperatures reaching into the low 90s beneath mostly sunny skies. The southeast wind will be a bit lighter on Thursday at 5-10mph. Overnight will be mostly clear and muggy with low temperatures stopping in the low 70s.

Up Next: A strong mid and upper level ridge of high pressure will hold firm across the Southeast U.S. through Memorial Day Weekend. This will result in an essentially rain-free period with steadily increasing high temperatures. Sunday and Monday will likely top out around 95 degrees. For now, humidity will be “in-check” and not to summer levels but you will notice a little. From the Jambalaya Festival, the Bayou Country Superfest, to beach trips along the central Gulf Coast, quiet weather and hot temperatures will persist.  There is no sure sign of a breakdown in this pattern for increased rain chances within the 7-Day Forecast.

From weekend plans in the #BatonRouge area to the beach, the weather will be the same: #HOT. Here is a breakout forecast for the @JambalayaFest, @bcsuperfest and coastal destinations. pic.twitter.com/iMcyFec9TG

Sun and Heat Safety: Some friendly reminders for your summer of fun events—sunburn can occur in less than 15 minutes with the extreme U.V. Index typical of this time of year. In addition to that, heat exhaustion and heat stroke can set in just as quickly. Recognize the signs and symptoms displayed in this graphic. Seek medical attention if you or somebody you know is affected. While we all enjoy a list of cool beverages, be sure water is at least a part of that list! Finally, look before you lock. DO NOT leave people or pets in an unattended car.

The Mississippi River: At Baton Rouge, major flood stage continues with a level of 44.1’ as of Wednesday morning. Peaking at 44.1’ on March 19, the river set its 7th highest recorded crest at Baton Rouge. At 138 days, this year marks the longest period above flood stage at Baton Rouge. With another round of heavy rain occurring in the Midwest, runoff will now result in a second, higher crest in early June. 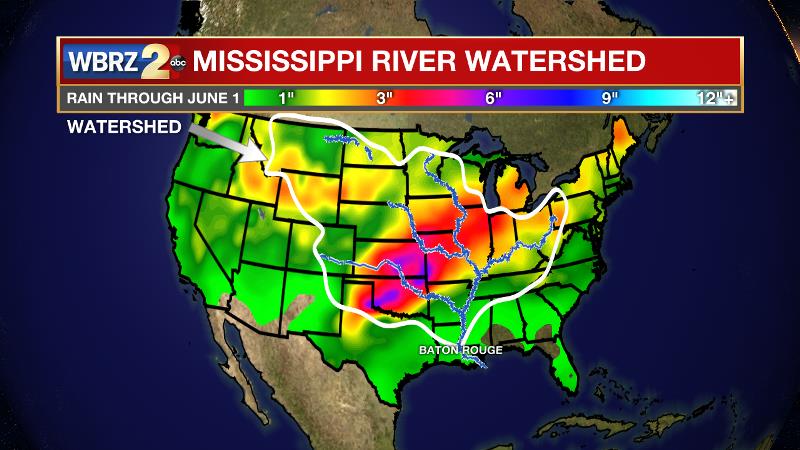 The current forecast is for the level to reach 44.5’, which would be one of the top five highest crests on record. The Morganza Spillway is likely to be opened to mitigate flood risk downstream into the Baton Rouge area. This will increase water levels over unprotected areas over the Atchafalaya Basin. On the Mississippi River, the high water will remain an issue for river traffic and river islands, although some inundation will continue for unprotected low-lying areas. The city of Baton Rouge and the main LSU campus are protected by levees up to 47 feet. Some soggy areas and seepage may be noted due to the long duration of high water placing pressure on the levees. As some of the Mississippi River diverts into the Atchafalaya River, gauges at Krotz Springs and Morgan City will stay high as well. This creates backwater flooding in parts of Assumption Parish in areas such as Bayou Chene, Stephensville and around Lake Palourde.