Regardless of development or track of a low in the Gulf, rain chances will increase over the weekend. Tropical showers can leave behind high amounts in a relatively short time.

On Wednesday, the Baton Rouge area set a record for May warmth. It was the 13th consecutive day reaching 90 degrees, breaking the previous streaks of 12 days set in 2011 and 2012.

NEW RECORD: Thermometers have made it to 90 degrees for the 13th consecutive day at Metro Airport in #BatonRouge. https://t.co/lkRHkPKYpb

The Tropics: A broad surface low over the Yucatan Peninsula is becoming better organized and producing clouds, showers and thunderstorms in the northwestern Caribbean Sea. Environmental conditions are expected to become more favorable for development and a sub-tropical or tropical depression is likely form by Saturday evening over the eastern or central Gulf of Mexico. Regardless of development, heavy rain and rip currents will be a threat from the Central to Eastern Gulf Coast through the Memorial Day Weekend. The National Hurricane Center has assigned Invest 90L an 80 percent chance of further development.

Today and Tonight: Thursday may be the final one this week where weather can be attributed to the typical warm season pattern. Highs will top out near 90 before a flare up of afternoon showers and thunderstorms. Clouds and showers will diminish overnight, with lows dipping into the low 70s.

Up Next: Coverage of showers and thunderstorms will increase into the Memorial Day Weekend. Whether or not a tropical system develops, a feed of moisture will enhance rain. Unfortunately, this could put a damper on many outdoor plans locally and for locations to the east. Through Wednesday, a broad 2-5 inches of rain is expected in the local area, which would be manageable. As is typical with tropical thunderstorms though, downpours will be possible and could result in isolated higher amounts to cause localized flooding issues. At this time, it appears that the highest totals will occur on the east side of the system in south Mississippi and south Alabama. Those vacationing in these locations should take note and plan accordingly.

If you have beach plans this weekend, know that current information points to the highest rain totals from coastal Mississippi to Florida. Probably not a whole lot of time in the sand, more will be known over the next few days... #Invest90L pic.twitter.com/BWR8VeMhOO

A broad upper level trough will narrow and focus into an upper level low through the end of the week. Cooling aloft associated with this low will result in additional instability and increased coverage in daily showers and thunderstorms. Still, through Friday, the main driver of convection will be daytime heating as well as marine breezes and outflow. In fact, an outflow boundary was responsible for the overnight activity in the Baton Rouge area early Thursday. Attention turns to a tropical disturbance for the upcoming weekend. The upper level low may develop a surface connection with a low moving into the Gulf of Mexico and some tropical or sub-tropical development is likely. Forecast models are coming into better agreement on the path of this system moving it due north across the Gulf toward the Mississippi/Alabama coast by Memorial Day. The Weather Prediction Center focuses the area of heaviest rain from coastal Mississippi eastward to the Florida panhandle. Isolated amounts upwards of 10 inches will be possible there. Given the path of the system shown by forecast models, this makes sense, as the heaviest action will be on the east side of the ragged system. 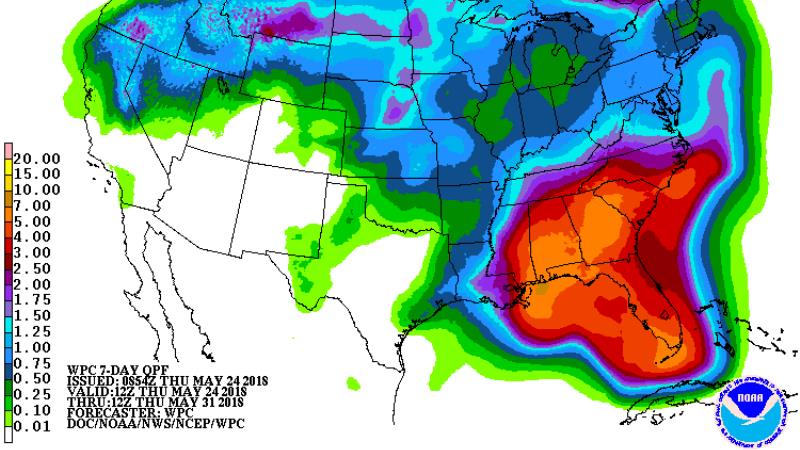 The 13 Parish, 3 County WBRZ Weather forecast area should receive 2-5 inches of rain through Wednesday with isolated higher amounts. Where the higher amounts occur, there may be some localized flooding issues. Spokes of energy pin wheeling around the low may result in some nighttime rain in addition to the traditional diurnal precipitation cycle. The surface low may linger near the coast well into next week, continuing greater coverage of showers and thunderstorms.