As a weak front passed, measurable rain fell at Metro Airport on Thursday morning concluding a top five Capital Area dry stretch at 33 days. The next front we are tracking will deliver the coldest air so far this fall season.

Up Next: Southeast winds will take over on Saturday. At first, not much change will be noticed. Temperatures will begin in the upper 50s and climb into the upper 80s with plenty of sunshine. Some high clouds could mix into skies during the afternoon. By Sunday, the southeast winds will provide enough moisture for clouds to lower and thicken and perhaps squeeze out a shower late in the day. A strong cold front will blow into the area on Monday. This system will provide another chance for isolated showers and thunderstorms and then bring the coolest temperatures so far this fall season. As skies clear behind the frontal passage on Tuesday, expect high temperatures in the upper 60s to low 70s and low temperatures in the 40s through at least Thursday. CLICK HERE for your detailed 7-Day Forecast. 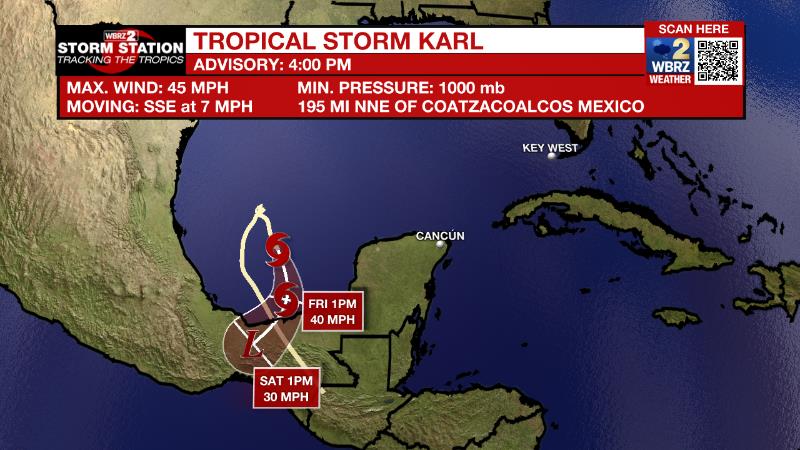 The Tropics: Tropical Storm Karl was moving to the south at 7mph and weakening on Thursday afternoon with maximum sustained winds of 45mph. The storm will continue south through landfall in Mexico on Friday night and continue weakening thereafter.

The Explanation: The next few days will remain dry as inland dew point temperatures settle in the 50s behind the recent front. However, winds will switch around to the south allowing moisture to get involved once again over the weekend. Expect low temperatures in the 60s with some high clouds developing again as early as Saturday. A deep, upper level trough of low pressure will start to build into the Eastern U.S. Sunday. This trough will drive another front into the area by Monday. Since onshore flow will have already started moisture return, a couple of showers and thunderstorms will be possible with this system Sunday night into Monday followed by another frontal passage. The depth of the colder air mass looks much more significant with this front. High temperatures are expected to be in the upper 60s to low 70s Tuesday through the middle of next week. Low temperatures will reach their coldest marks so far this fall with some spots hitting the mid 40s.