One three letter words describes the focal point of the entire 7-Day Forecast… hot. Beyond Saturday, there is little chance for any showers or thunderstorms. A HEAT ADVISORY is in effect for the WBRZ Weather Forecast Area from 10am - 7pm Friday. A HEAT ADVISORY means heat index values of 108 to 112 degrees are possible.

Hot temperatures and high humidity may cause heat illnesses to occur. Drink plenty of fluids, stay in an air-conditioned room and out of the sun when possible, and check up on relatives and neighbors. Young children and pets should never be left unattended in vehicle under any circumstances. Take extra precautions if you work or spend time outside. When possible reschedule strenuous activities to early morning or evening. Know the signs and symptoms of heat exhaustion and heat stroke. Wear lightweight and loose fitting clothing when possible. To reduce risk during outdoor work, the Occupational Safety and Health Administration recommends scheduling frequent rest breaks in shaded or air conditioned environments. Anyone overcome by heat should be moved to a cool and shaded location. Heat stroke is an emergency! Several consecutive days of dangerous heat will be possible.

Next 24 Hours: A few vigorous thunderstorms that developed on Thursday afternoon will steadily diminish into the evening hours. As skies clear out, low temperatures will return to the mid 70s. Friday will begin with some sunshine and temperatures will again surge into the mid 90s. While a stray shower or thunderstorm could pop in the afternoon, radar will not look nearly as busy as Thursday.

Up Next: Saturday, there still may be an opening for an afternoon shower or thunderstorm to form, but we are not currently expecting anything organized. Heat will be the big story right on through next week. Unfortunately, there are some early signs of even hotter temperatures—upper 90s—Saturday through at least Thursday. In fact, it is not out of the question that one or two reporting stations can find an air temperature of 100 degrees, a mark not met in the Capital City since August 2015. On the other hand, feels-like temperatures, or heat indices, will have no problem reaching well into the 100s. CLICK HERE for your full 7-Day Forecast. 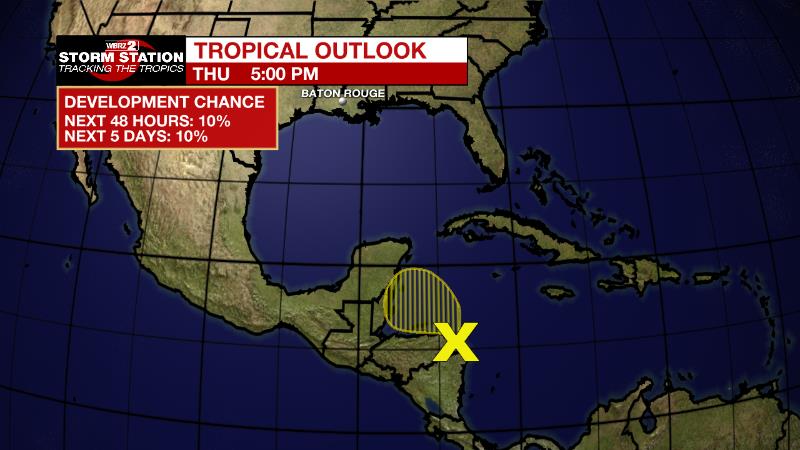 The Explanation: A dominant upper level ridge of high pressure will shift over the Mid-Mississippi River Valley and broaden out over the Gulf Coast through the weekend. Triggers for convection will be much more limited on Friday and Saturday resulting in areal coverage of around 10 to 20 percent each afternoon. Through the weekend, and especially into next week, the ridge will bring sinking, warming air. With this, high temperatures will easily reach the upper 90s. In fact, one or two spots could even sneak up to 100 degrees. With dew point temperatures in the mid 70s, feels like temperatures could eclipse 108 agrees prompting the need for heat advisories. When the heat index is expected to move over 113 degrees, heat warnings are issued. It will also be very difficult for showers and thunderstorms to develop with daily coverage of 10 percent, at most.