A strong cold front will blow through the region late Friday. Record cold temperatures are possible this weekend.

Next 24 Hours: Most of the night will be clear, but some clouds will start to develop late. Additionally, low temperatures in the low 50s are likely to occur closer to midnight with temperatures starting to rise before daybreak as winds pick up out of the east and southeast. Friday will be mostly cloudy with scattered showers possible as early as dawn, but plenty of dry time is expected through the day. After high temperatures reach the mid 70s, the greatest coverage in showers and thunderstorms will come along a cold front during the afternoon and evening hours. An isolated strong thunderstorm is possible with gusty winds. Behind the front, winds will shift out of the northwest at 15-20mph with occasional gusts over 30mph Friday night. 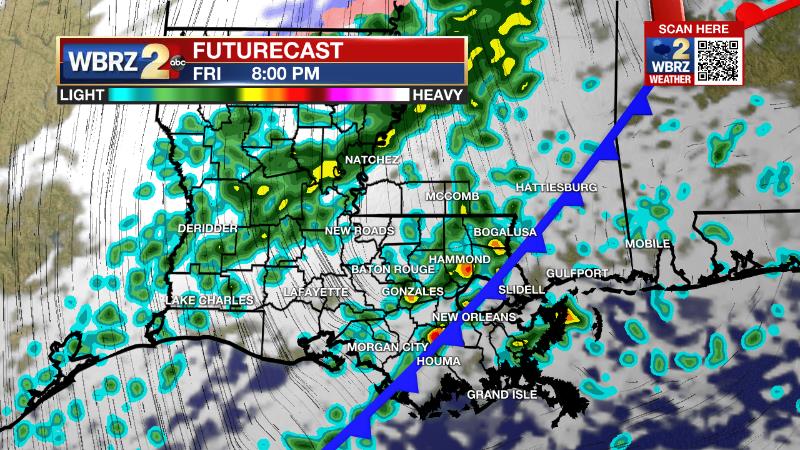 Up Next: Much colder air will follow the front. Thermometers will sink into the 30s by Saturday morning and fail to go beyond the low 50s in the afternoon. A freeze, several weeks past the average last occurrence, is expected on Sunday morning. In fact, the current forecast calls for a tie of the record low of 30 degrees dating back to 1948. Since the growing season has started, it will be important to cover or move young, tender and tropical plants. Thermometers will rebound into the 60s on a sunny Sunday afternoon. Highs will bounce right back into the 70s on Monday before the next chance of showers arrives late. CLICK HERE for your detailed 7-Day Forecast.

The Explanation: A strong upper level trough of low pressure will merge with the jet stream on Friday while digging into the Southeast. A potent cold front will accompany that system and while the severe weather potential looks to be low, the clash in air masses should be enough to produce scattered showers and thunderstorms—especially Friday afternoon and evening. If any thunderstorms can reach severe criteria, damaging wind gusts would be the primary concern. A significant cold air mass will overtake the area this weekend in the wake of that front. A strong surface high pressure system, originating from the Arctic, will dive into the Lower Midwest setting up strong northerly winds over the local area. Friday night, expect sustained winds of 10-20mph behind the front with gusts over 30mph possible through Saturday morning. These winds will help to usher in near record cold temperatures for Mid-March. Despite sunshine, high temperatures will be held down by the advancement of cold air on Saturday and struggle to reach the 50s. The lowest high temperature for the date was 48 degrees in 1993. Perhaps the record most in danger of falling is the low temperature on Sunday morning. Beneath clear skies, light winds and dry air will lead to a perfect setup for falling temperatures and many locations north of I-10 will freeze. As of now, the forecast is for 30 degrees, which would be good enough to tie the 1948 benchmark. Some neighborhoods could certainly reach the upper 20s. Since we are three weeks past the average final freeze and the growing season has started, expect some warnings from the National Weather Service to care for sensitive vegetation. Temperatures will begin recovering quickly on Sunday as the parent upper level trough moves east and warming occurs at all levels of the atmosphere. Winds will turn south and southwesterly by early next week as another upper level trough of low pressure moves out of the Southwest U.S. into toward the local area. This system will return a chance of showers to the early as early as Monday evening.