With a relatively warm and dry atmosphere, showers and thunderstorms will remain limited to the isolated category. Even where a brief cool-down occurs, returning sun will steam things right back up very quickly. On Wednesday, less than 10 percent of the forecast area picked up a shower. However, the showers that did occur fell over some of the more populated areas of East Baton Rouge and Livingston Parishes, so many backyards benefited. 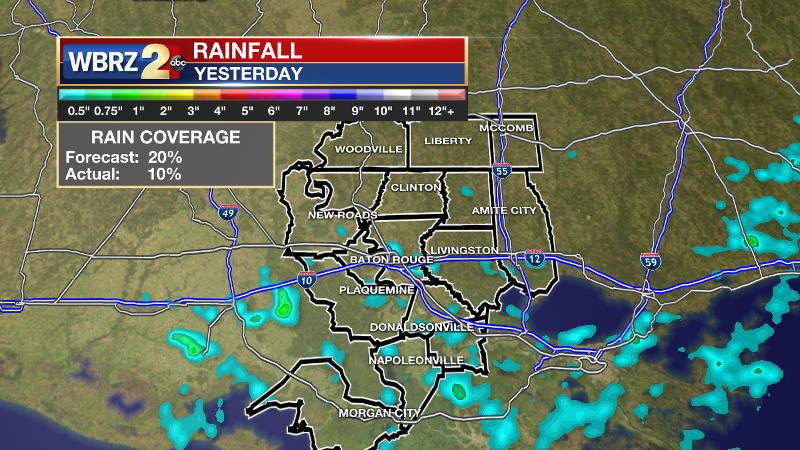 Today and Tonight: We continue to find hot thermometers getting little relief from rain with only 20 percent coverage in afternoon showers and thunderstorms. A fourth straight day of 95 degree heat appears likely. High dew point temperatures will result in "feels-like" readings over 100 degrees during the afternoon. Of course, temperatures in the 90s are normal during the summer season, but thanks to a very hot May, the count is way ahead of schedule. About 20 more days have reached the 90s than what is usual by this point on the calendar. Overnight, skies will be mostly clear with lows in the mid to upper 70s and light, southwest winds.

Up Next: Friday will wrap up the week in similar fashion before some changes to the weather emerge over the weekend. Saturday will be transitional, then showers and thunderstorms will increase in coverage by the back half of the weekend. Added rain around the region will cause high temperatures to come down by a few degrees. Scattered, mainly afternoon activity is in the forecast Sunday through Tuesday. At this time, Monday looks like the most active day due to an upper level disturbance moving across the Gulf Coast. 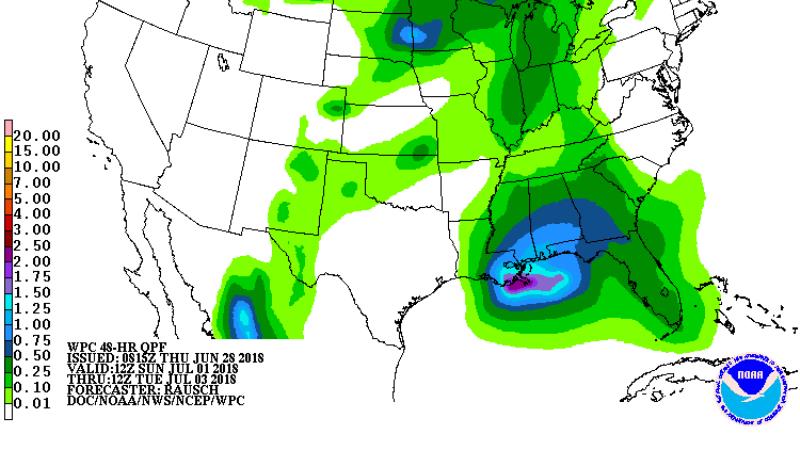 An upper level ridge will move from the Mountain West to Mid-Atlantic Thursday through Saturday With the ridge axis overhead on Friday, hot conditions with the lowest rain chances of the 7-Day are expected. Once that ridge settles northeast of the region, slightly more convection will be firing over the following days. Scattered, mainly afternoon showers and thunderstorms will develop Sunday through at least early next week. Due to the added cloud cover and precipitation, most locations will see high temperature reduced by a few degrees, below average but still near 90. Forecast models continue to hint at a westerly wave being driven across the Gulf Coast due to the parked ridge in the Northeast. Should this occur, a day or two of widespread rain could be the outcome in the Monday or Tuesday timeframe. The Weather Prediction Center is indicating that a general 1 -2 inches of rain could occur between Sunday and Tuesday.