Three in custody after pursuit turns into manhunt in Ascension Parish

DONALDSONVILLE - Three people were arrested Monday after a pursuit spanning multiple parishes turned into a manhunt in rural Ascension Parish.

The chase came to an end in Donaldsonville around 11 a.m. after beginning in Iberville Parish. The incident involved multiple agencies, including the FBI, according to Ascension Sheriff Bobby Webre.

Officials said the pursuit stemmed from a call concerning suspicious individuals at a bank in White Castle. Authorities say the three men had shown up at the bank last week, asking numerous odd questions of one of the tellers. An employee called law enforcement Monday morning when those same men showed up again wearing backpacks.

When police tried to question the trio, they reportedly fled in their vehicle. The suspects led officers across parish lines, apparently abandoning their backpacks along the way.

An alert sent out to Ascension-area residents from the Ascension Parish Sheriff's Office said deputies were looking for two of the suspects in the area of Highway 1 near Highway 943. All three were in custody by 12:30.

The suspects, identified as 21-year-old DeMarcus Daggs, 20-year-old Tynea Gray and 20-year-old Harden Lewis Jr., are being booked into the Ascension jail as fugitives. 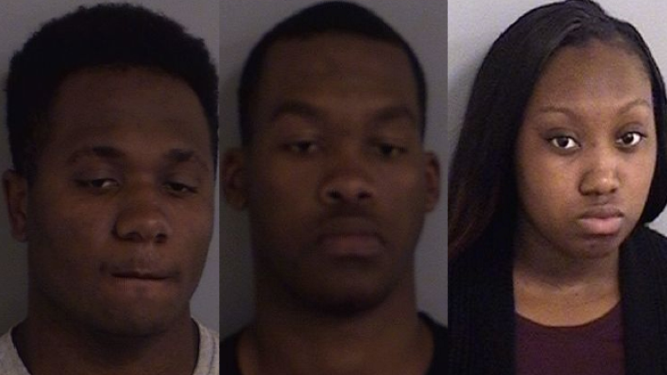 Officials say they're still looking for the bags the suspects left behind.